GOP Elite vs. GOP Base On Gay Marriage 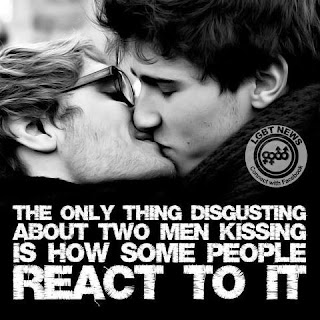 As noted in a post yesterday, Senator Bob Portman's conversion on gay marriage triggered a tempest of flying spittle and angst among the knuckle dragging, Bible thumping elements of the GOP base.  Meanwhile, among the Washington elite of the GOP Portman's change of position merited a yawn or perhaps even quiet approval.  One can only suspect that the so-called elite see where the nation is trending on gay marriage - or even anticipate a Supreme Court ruling striking down some or all of the gay marriage bans - and want to reposition the party away from a losing long term position.  Such pragmatism and acceptance of reality, of course, is something unknown to the party base, especially the Christofascists elements.   A piece in Politico looks at the subtle but growing divide between the rational elements still in the GOP and the increasingly racists and religiously fanatical party base.  Here are excerpts:

Far from touching off a Beltway political firestorm, Portman’s announcement that he has a gay son and now supports same-sex marriage drew a muted or even positive response from his fellow members of the Republican elite.

The reality Portman’s flip-flop exposed is this: among the Republican political community, the people who actually run campaigns and operate super PACs, support for gay marriage is almost certainly a solid majority position. Among strategists born after the end of the Vietnam War, it’s not even a close call.

Polls show that the base of the Republican Party remains opposed to gay marriage, though open to civil unions between partners of the same sex. Some of Portman’s colleagues struck a moderate tone on marriage over the last week: Florida Sen. Marco Rubio said the definition of marriage should be a state issue, while libertarian-leaning Kentucky Sen. Rand Paul floated the idea of removing marriage from the tax code and freeing adults to make marriage-like contracts for legal and financial purposes.

The result is a Republican leadership class that’s sharply at odds, culturally, with the voters their party aims to lead.

A vivid illustration came just a few weeks ago, when in late February a throng of top Republican politicos signed an amicus brief urging the Supreme Court to support a constitutional right to gay marriage. Among them were a half-dozen senior aides to Mitt Romney’s 2012 presidential campaign, which officially took the view that marriage is exclusively between one man and one woman.  .   .   .   .   David Kochel, a top Romney adviser who steered his Iowa caucus campaign, said his endorsement of the amicus brief wasn’t even controversial in his professional circle.

On top of the generation gap, Republican pollster Kristen Soltis Anderson said there are other cultural factors separating the GOP’s political practitioners from their conservative constituents.  “While age is an obvious factor that relates to views on the issue of gay marriage, so too does income, education level, living in the Northeast. If you think about many political consultants being upper-income Northeastern folks, then that might contribute to them [leaning] more favorably toward gay marriage than Republicans more broadly,” said Anderson, who supports gay marriage.

The perception that the GOP upper crust looks down on social conservatism isn’t a new one: cultural conservatives have grumbled for years that the Republican moneyed elite cares more about keeping capital gains taxes low than protecting the unborn.

Republican media consultant Nick Everhart, whose Ohio-based firm has worked for a number of the most conservative Senate candidates during the past few cycles, said there’s clearly a “disconnect” between the party in D.C. and the base in the states.

“It’s clear that a number of the institutions in Washington aren’t cognizant of the fact that there is a disconnect and they’re on the polar opposite side of where the GOP primary electorate is,” Everhart said. “It’s going to continue leading to disagreement and rancor with the base.”

Actual elected officials are more skittish about getting crosswise with the party base on a central values issue like marriage. Of all the signatories to the pro-gay marriage amicus brief, only one was a Republican who actually has to face the voters in a remotely competitive election: New York Rep. Richard Hanna. There are others sympathetic to the same-sex marriage cause, or at least utterly indifferent to the outcome, but they’ve kept quiet so far.

When and where things will shake out is anyone's guess long term.  The GOP's real problem is that the elite cynically decided to let the Christofascists and racists into the party for short term political advantage and now the Frankenstein monster they created may well be the death of the party as the poisonous party base refuses to move with the times much less embrace modernity and knowledge.
Posted by Michael-in-Norfolk at Saturday, March 16, 2013