Is the Mormon Church In Talks to Write LGBT Utah Non-Discrimination Bill? 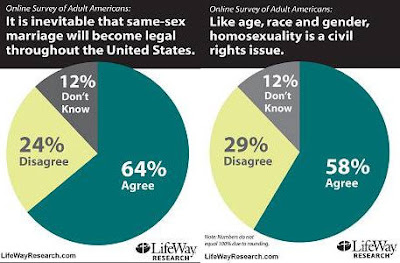 Are you reaching for your smelling salts after reading the caption of this post?  Yes,  it is shocking in some ways.  On the other hand, with anti-gay positions being cited as one of the largest reasons the under 30 generations are leaving organized religion, perhaps the Mormon Church is recognizing the inevitable and seeking to minimize its loses.  As the charts above indicate, the general consensus revealed by a new Southern Baptist Convention Poll is that gay marriage nationwide is inevitable and a significant majority of people see gay rights as a form of civil rights akin to struggles based on gender and race.  Here are highlights from Right Wing Watch:

The Southern Baptist Convention’s polling arm LifeWay is out with a new poll revealing widespread support for gay rights, particularly among young people. According to the survey, a clear majority of Americans believe that “homosexuality is a civil rights issue like gender, race and age,” agree that same-sex marriage is “inevitable” and oppose employment discrimination against gays and lesbians.

Key findings from the poll include:
The poll also found that women, young people and people with college degrees were more likely to favor gay rights.

But back to the Mormon Church.  Could the Church be undergoing a sudden case of enlightenment as occurred with blacks and those allowed to be members of the Mormon priesthood?  If nothing else, over the years the Mormon Church has proved itself pragmatic if nothing else.  Would that the Roman Catholic Church could take some hints from it.  Here are details from EqualityonTrial:

Another report says the language was finalized and the bill passed out of a Senate committee.
The Mormon Church is reportedly working on language for a statewide LGBT non-discrimination bill in Utah. The church supported a similar bill in 2009, according to a report:


The church actually endorsed a similar ordinance in 2009 in Salt Lake City.This is momentous, surely, but the Mormon faith, whether real or done for politics, is changing. In December, Mormon leaders launched a website called mormonsandgays.org, and the church stressed that homosexuality is not a choice, that all the brothers and sisters need to be treated with compassion, that we all “need to love one another.”

The church is well-known for its efforts to pass Prop 8 banning marriage equality in California.
The Salt Lake Tribune first broke the news on Thursday. According to their story:


Sen. Curt Bramble, R-Provo, opened a bill file on Thursday — the last day to request attorneys draft legislation — titled Housing and Employment Amendments and will sponsor the legislation should an agreement be reached.

The newspaper notes that talks have been ongoing for the past eight months and there is not a bill yet, though other sources suggest that all the parties to the negotiations are close to final language. The report suggests that if the LDS church signs on to the bill’s language, it’s likely to pass.