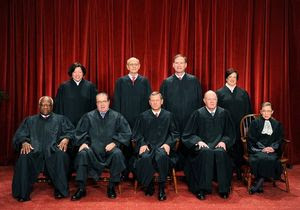 The speculation continues to swirl around how the United States Supreme Court will rule in the pending gay marriage cases that will see oral argument before month end.   As noted before on this blog, should the Court decide to dodge the issue of same sex marriage to maximum extent possible, it could do so by finding that the appellants in both cases lack what is called “standing” to litigate the lawsuits.  Indeed, the Court independently engaged Harvard Law professor Vicki C. Jackson to brief the issue of standing in both the Proposition 8 appeal and in the DOMA appeal brought by the GOP members of the House of Representatives.  In the DOMA appeal, Professor Jackson filed her amicus brief and, not surprisingly, found (a) that the Supreme Court lacked jurisdiction given the posture of the case and (b) that the House GOP lacked standing to defend a ruling in which the executive branch has acquiesced. Similar issues of standing surround the Proposition 8 case where the appellants are the proponents of the ballot initiative since the state of California has refused to defend Proposition 8.  But many suspect that the court may feel compelled to address the issue especially now that even a Southern Baptist Convention survey has found 64% of respondents see gay marriage nationwide as inevitable.  In the latest development, the Court has granted Solicitor General Donald B. Verrilli, Jr.'s request for time to argue against Prop 8's constitutionality.  Here are highlights from Equality on Trial:

The Supreme Court has granted a request from the Solicitor General for time to argue in support of the same-sex couples who are plaintiffs in Hollingsworth v. Perry, the Prop 8 case.

The Solicitor General had filed a brief in the case on behalf of the United States. Their argument rests on California’s situation: the state treats gays and lesbians the same in most respects (including parenting and allowing the filing of joint taxes) but Prop 8 denies gay and lesbian couples alone the designation of marriage. In the administration’s view, the Court can apply a heightened level of judicial scrutiny, since the law classifies people in the basis of sexual orientation, which is not a valid basis on which to make laws; then, the Court can hold that under a heightened level of judicial scrutiny, denial of the label “marriage” violates equal protection when a state already treats gays and lesbians equal to straight people. The administration suggests this view instead of an “all 50 states” decision, as a pragmatic step. But if the Court decides to apply heightened scrutiny to laws impacting gays and lesbians, it isn’t clear that any ban would survive review.

The Solicitor General, of course, hasn’t been involved in the Prop 8 case at any stage of the litigation. In 2008, then-candidate Barack Obama said that he opposed the amendment, but also believed marriage is only the union of a man and a woman. During the Prop 8 campaign, his words were used in Yes on 8 ads to persuade voters to pass the initiative. But over time the president’s views changed and last year he came around to personally supporting marriage equality. The Solicitor General’s brief, which was signed off on by the president himself, was the first time the president (or any President of the United States) had ever suggested there is a constitutional right for same-sex couples to marry.