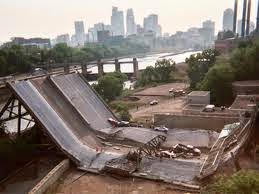 With America's highways crumbling and economic growth being stifled - here in Tidewater Virginia, the traffic gridlock restricts the growth of port operations - what are conservatives, i.e. Republicans trying to do?  Kill a bill that would replenish the depleted federal highway trust fund.  The effort is symptomatic of the wrongheaded, destructive agenda of far too many self-described conservatives who might be better described as extremists or economic saboteurs.  A piece in the Huffington Post looks at this batshitery.  Here are highlights:

The last likely opportunity for Congress to avoid completely draining the nation’s highway budget will present itself on Tuesday afternoon.

Though a Republican proposal to temporarily extend the Highway Trust Fund gained notable opposition Monday from two powerful conservative groups, leaders from both parties expressed optimism that the extension would pass.

On Tuesday, the House of Representatives is set to vote on a bill authored by Ways and Means Chairman Dave Camp (R-Mich.) that would raise nearly $11 billion to extend highway funds roughly until May 2015.

The Obama administration and congressional Democrats have derided a short-term extension (preferring, instead, a multi-year plan), but their opposition has become more ceremonial with time. With a deadline fast approaching, the White House announced on Monday that it would support the Camp bill.

Aides in the administration and in the Senate told The Huffington Post that their objective now is to build the groundwork for passing a long-term highway funding bill during the lame-duck session following the November elections. They noted the need for a quick resolution (states will begin receiving smaller, staggered payments from the federal government for interstate highway projects starting in August) and the emerging bipartisan consensus around Camp’s bill -- endorsed by House Speaker John Boehner (R-Ohio) -- as reasons to save the fight for later.

Despite the rarity of such high-level bipartisan agreement, the bill’s passage is not preordained. Its chances, in fact, took a hit on Monday afternoon, when two anti-spending groups not only came out in opposition, but also told Republicans they would score the vote.

Club for Growth said it opposed the Highway and Transportation Funding Act of 2014 and would include it on its congressional scorecard. Heritage Action for America did the same moments earlier.