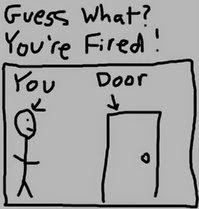 As noted before, many of the leading LGBT rights organizations have withdrawn support for the Senate passed version of ENDA in the wake of the Supreme Court ruling in Hobby Lobby which granted Christofascists the right to ignore civil laws they claim violate their right of "religious freedom."  Why the switch?  Because the version of ENDA passed by the U.S. Senate has a religious exemption so broad that a fleet of 18 wheelers could drive through it.  The exemption, combined with Hobby Lobby could in theory undermine LGBT protections in even gay friendly states.  Now, some fear that anti-gay House Republicans may push to pass the Senate version of ENDA with precisely such a goal. A piece by Michelangelo Signorile in Huffington Post looks at this frightening possibility.  It needs to be noted that while gays are the current primary target of  the agenda of special rights from Christofascists, Muslims, Hindus and others could end up finding themselves open to discrimination based on false "religious freedom" claims.  Here are some article highlights:

Last week I wrote about the trap that gay groups may have set for themselves in a post-Hobby Lobby world, having previously backed a broad religious exemption in the Employment Non-Discrimination Act (ENDA). By week's end, most major groups had pulled their support for ENDA, following a few that pulled out before the Supreme Court's Hobby Lobby decision. But believe it or not, right now some Republicans are working feverishly to get support for ENDA in the GOP and try to pass it in the House in this session, with the dangerous religious exemption that caused LGBT groups to withdraw support.

The irony here is off the charts, but the idea being floated is that Republicans should realize that LGBT rights are inevitable, and that anti-gay GOPers should therefore grab at the chance to pass a bill that could broadly give an exception to religious organizations and the businesses they own and enshrine that discrimination forever.

As an added bonus, the Supreme Court might view the exemption as a way to expand that allowable discrimination to "closely held," for-profit companies owned by people who have religious objections to gays, as it did in the Hobby Lobby case regarding religious objections to some forms of birth control.
HRC does still back passage of ENDA in this session (as does House Minority Leader Nancy Pelosi, openly lesbian Sen. Tammy Baldwin and other Democrats), but in response to the pulling of support by the National Gay and Lesbian Task Force, Lambda Legal, the American Civil Liberties Union, the Transgender Law Center and others, HRC president Chad Griffin wrote in an op-ed last week that the group wants to "narrow" the exemption and also said the community should "throw its weight behind" a comprehensive civil-rights bill.

If ENDA doesn't pass, he wrote, that bill would include employment as well as public accommodations, housing, education and credit -- something a lot of us have been demanding for a long time. However, Griffin didn't give any details or timeline regarding what would be an ambitious undertaking and a massive bill, and he refused to give interviews. And his group does still continue to lobby Republicans to support the current ENDA.

It's highly unlikely that ENDA will get passed in the House via any option available, with or without the gay groups onboard (and HRC's idea of "narrowing" the exemption would mean going back to the Senate again), but wouldn't it be the nightmare scenario if it did pass, with this exemption, and then LGBT groups had to demand that President Obama veto a bill he and Democrats had heralded for months?

Again, it's highly improbable that it would get to that, but I write this to underscore how this entire episode was amateur hour for the LGBT community. . . . . ENDA should never have been pushed and passed in the Senate with a religious exemption, not in 2013 -- nor should we have even thought of doing that in 2012, 2011, 2010, or, frankly, 20-anything. HRC, in its usual arrogance, and with blinders on, refused to listen to the community and the growing chorus among the grass roots, the people who've experienced the progress we've made on marriage equality and support by the American public and who were saying "no" to an exemption for years.

HRC often needs a check on its myopic, access-driven, win-at-all-costs strategies, especially under a new leadership that refuses to even give interviews to the LGBT press, not responding to requests, its president only speaking to the community via vague, meticulously crafted op-eds.

It is disturbing that once again the egos of those at HRC are putting the rights of LGBT Americans at risk.  Perhaps I need to peel the HRC sticker off of my car!