Will The GOP Punt on the Border Crisis? 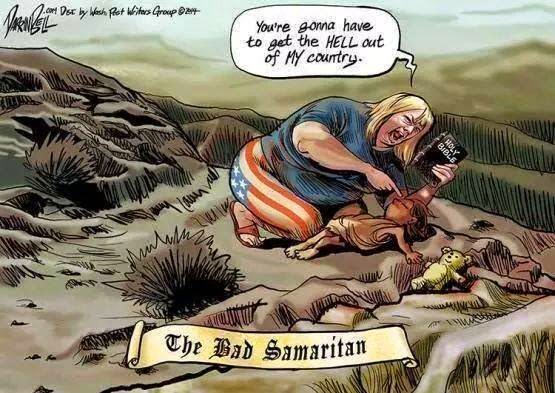 Republicans - including those in Congress - like to rant, demand that Barack Obama be impeached or sued, etc., but one thing they do not like to do is come up with any sort of policy solutions be it on proposals to replace or improve Obamacare or deal with the border crises involving tens of thousands of unaccompanied Central American children.  Good forbid that a real proposal be put forth made or a real decision be made.  That might upset the lunatic GOP base or perhaps convince voters that the GOP's proposals suck.  A piece in The Daily Beast looks at why the GOP may simply punt and do nothing about the border crisis.  Here are excerpts:

So who’s being a reasonable Republican on the border issue? Well raise my rent if isn’t Karl Rove, who said  on Fox Thursday morning that “Republicans have to look at this as an opportunity that they have to work.” Yes, Rove has a track record of pushing the GOP to seek Latino votes, so he has what the fair and balanced pundits call “credibility” on the issue; but with that Machiavel, you never know—he could be saying it knowing that his “responsible” reputation on the issue will spark a rebellion that will ensure that President Obama’s request fails.


I jest, a bit, but I’m just making the point that we have now reassumed the familiar and always soul-crushing position of gaming out how the Republicans are going to decide what to do with Obama’s $3.7 billion request to deal with the problem. On the one hand we have Rove and people like Lindsey Graham, who fears that the GOP will start shouldering the blame if it doesn’t act: “If we do that, then we’re going to get blamed for perpetuating the problem.”


On the other, you’ve got your usual assortment of tea people who think the whole thing is a “charade,” to quote South Carolina GOP Rep. Mick Mulvaney.  Most of these folks will probably coalesce around some piece of legislation, just so they look responsible to the know-nothing observer, but of course it will be legislation that’s entirely focused on border security, which isn’t really what this problem is about. It’s about: processing these kids more rapidly; maybe changing that 2008 law that made it easier for them to stay, which the administration, against some Democratic objections, is already trying to do; and treating them more humanely while they’re here. But their base wants to hear people thunder about border security, so they will inevitably thunder about border security—and possibly force Obama to sign a law that won’t fix the problem, a fact that they, also being Machiavels, will know ahead of time.


Here, meanwhile, is the thing to understand about this $3.7 billion. You’re going to hear Republicans complain, if they haven’t started already, about the fact that roughly half ($1.8 billion) of this amount would be directed not to the manly Bureau of Throwing Brown People Back to the Coyotes but to the Department of Health and Human Services. This will, I would imagine, emerge as a central GOP talking point over the next few days, because HHS is one of those bleeding heart, girly-man agencies.


[T]here’s a good reason half the money is going to HHS. Under that 2008 law—passed, as you’ve no doubt read by now, unanimously by both houses (unanimously, of course, includes Republicans) and signed by President Bush—when a Border Patrol agent nabs a kid from anywhere south of Mexico, the agent has to turn the kid over to HHS to make a determination about whether the kid can stay. A Bush law.


Which raises two points. One, until that law is changed, HHS has to get a big cut of the purse. And two, if the Republicans resist Obama’s efforts to change that law, how exactly can they call themselves tough on border security?


Well, yes. We know how. We’ve all seen this movie way too many times. I don’t know what the Republicans will end up doing here, but it will be dictated by the usual two factors. First, the outrage of the base. It’s cranking up already—oppose Obama here, or you will get a primary


The second factor will be their internal polls. If the polls suggest what Graham said, they’ll compromise. They did once in the Obama era on a big thing—the fiscal cliff deal. Then, their polls were telling them that they were going to be blamed if midnight struck and the Bush tax cuts expired and everyone’s tax rates increased. If the polls now tell them very clearly that most voters—let’s refine that; most likely 2014 voters—are going to blame them for the irresolution of this problem, they’ll compromise. Otherwise, they will oppose.

Once upon a time Republicans did what was right because, well because it was the right thing to do.  Those days are long gone.  As are many sane and decent individuals who once considered themselves Republicans.