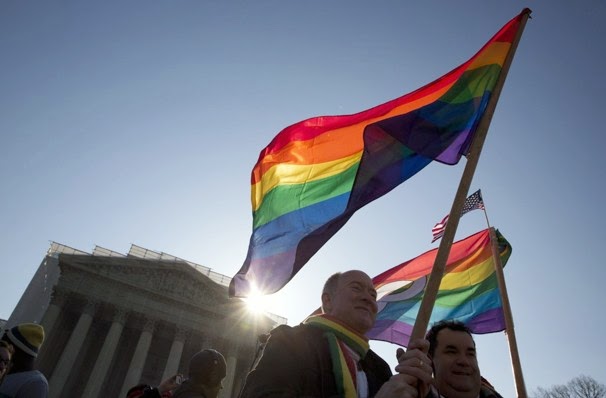 I am a strong advocate for coming out and securing not only self acceptance, but also along the way force others to change their hearts and minds. Unlike some in the LGBT community, I am not looking for tolerance.  I want to be accepted as a full and complete person and seen as a valid member of the community.  For those who cannot do that, my attitude is "its your loss if you don't accept me."  After the horrors of being fired for being gay and going through a brutal divorce with a judge who deemed being gay as a choice, things have looked up.  The husband and I are well accepted in the community and, given the success of his salon, at times I feel married to a celebrity.  Not everyone is as lucky as we have been.  A new book "The Tolerance Trap: How God, Genes, and Good Intentions are Sabotaging Gay Equality." looks at the pitfalls of merely settling for tolerance.  Here are highlights via Salon:

The larger social message now, however, is that coming out will promote tolerance. So the tolerance framework depends on coming out but insists that it be done quietly  and correctly so as not to stir up or upset heterosexual equanimity. At the same time, and contradictorily, the fantasy of a newly tolerant world downplays the persistence of the closet and therefore conceals the continued strength of homophobia.

People can “receive” the coming out of a friend or family member as life altering, or they can hear it for a moment and then seemingly ignore its salience. Certainly, many gays report this response with their parents, when the utterance has only temporary meaning as it is actively disavowed in subsequent familial interactions or when admonitions not to come out to others (grandparents, relatives) are the immediate response.

But coming out as a singular process—and the closet as the paradigmatic metaphor for same-sex life itself—depended on the establishment of a gay identity and a gay movement to make it happen. In simple terms, one needed the very category of “the homosexual” to produce the story of coming out. As many historians and theorists have convincingly argued, the homosexual as a distinct category, a demarcated identity (rather than, say, a set of possible sexual acts or preferences) is a very modern invention, as is the heterosexual. Coming out may appear now as the transhistorical and transcultural story of gay life, but it actually was “invented” as recently as the early part of the last century.

Both the cultural historians and the psychologists would also agree that the idea that “the closet” and “coming out” are one-off experiences is patently false. Not only is coming out an endless and recurrent process so that one is always having to reengage the questions one thought settled, but the closet is of course also a space of variability, inflected geographically and culturally. Someone’s “life in the closet” may be another person’s refusal to be pinned down. While you can’t be a little  bit pregnant, you certainly can be a little  bit “out.” What seems like a straightforward question (“Are you out?”) will be answered by perhaps the majority of gays in long and meandering sentences rather than a single word. It might  be answered emphatically (“Of course I am!”) and then qualified in further conversation. Or it may be the proverbial open secret in which everyone seems to know but no one seems to be able to utter the words. While some are out to absolutely everyone in their lives, the majority of (nonexclusively heterosexual) Americans practice some sort of concealment of their sexual preference . . .

Tolerance must not be the goal.  Rather full acceptance and fully legal and social equality must be the goals.  One needs to not make excuses or worry about the sensibilities of straights, far too many of whom care nothing about our sensibilities.  Yes, there will be some - most notably the Christofascists, who will never accept us.  But that doesn't mean we cease the effort to live "out" and openly both for our own mental well-being, but also to keep the momentum going for change.  Hopefully, the end result will be that it is the homophobes and Christofascists who are the ones driven into the closet.  It would be far too sweet to have them experience what they have forced on others for far too long.
.
Posted by Michael-in-Norfolk at Sunday, July 13, 2014