9 Sinister Things Christofascists Do in the Name of God 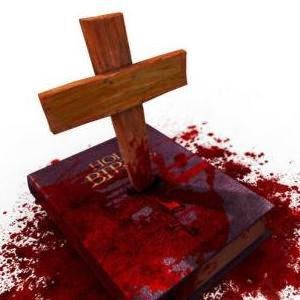 Through the centuries religion has caused untold evil and, as continues to be the case today, the evil is done in the name of God.  And with the Christofascists the basis of their evil efforts is always supposed biblical authority.  Never mind that they disregard huge portions of the Bible and act in a manner usually diametrically the opposite of the Gospel message.  A piece in Salon looks at some of the evil done by today's Christofascists - who make the Pharisees of the Bible look like wonderful people in comparison.  Here are some article excerpts:

Christians may be a super majority in the U.S. They may control the U.S. Congress and, as we all were reminded recently, the Supreme Court. But that hasn’t stopped Bible believers from preparing their children for martyrdom. Web resources abound for church youth leaders who want to make sure their young charges are ready when the lions come for them. Titles include, “Expect to be Persecuted” “Persecution Equals Reward” and “Adventure Game—Persecution of Christians and Paul of Tarsus.”

The Christian persecution complex is absurd. Modern American Christians are not persecuted or under attack.  But for Christians who are truly concerned about hostility toward their faith, I have a bit of advice: Don’t be evil. And don’t let your co-religionists get away with being evil either.

A huge part of the antagonism that even moderate Christians face from outsiders is due to the fact that too many devout believers claim a righteous mandate to say and do things that are truly horrible.  Let me spell it out.

1. Opposing protections and rights for children is evil.Thanks to the influence of biblical Christianity, the U.S. stands alone with Somalia in failing to ratify the United Nations Convention on the Rights of the Child. Why? Because the Bible instructs parents to hit their children, among other things. Laws that give rights to children go head to head with biblical texts which say in no uncertain terms that children are the property of their fathers, to be punished or even killed in accordance with the father’s religious beliefs and other priorities.

2. Denying young people accurate information about their bodies is evil.The U.S. government just spent a decade and a billion dollars on failed abstinence-only education programs concocted by Bible believers who live in some delusional world where prohibition works and virginity is next to godliness. . . . Instead of medically accurate information and thoughtful conversation about intimacy and childbearing, teens get promise rings and slut shame.

3. Demeaning and subjugating women is evil.When it comes to dignity and equality for women, instead of acting as moral torchbearers, Bible believers have been at the back of the pack for generations, along with conservative factions from other Abrahamic traditions ranging from Islam to Mormonism.

4. Obstructing humanity’s transition to more thoughtful, intentional childbearing is evil.“If a woman dies in [child]bearing, let her die; she is there to do it.” So spoke Martin Luther. But beyond the horrors of women dying after days of labor or bleeding out after unwanted childbirth, lies the incontrovertible evidence that children, families and whole communities do better when parents can plan their families. As one medical student put it, “The failure of any sect to support the benefits to humanity that could be obtained through the use of contraceptive technology is blasphemy.”

5. Undermining science is evil.Science has been called what we know about how not to fool ourselves.The discovery of empiricism and falsification—a method of inquiry that forces scholars to ask the questions that could show them wrong—is what has differentiated modernity from the Middle Ages. . . . .But the scientific method has also become an existential threat to Bible belief. We know now that the Genesis creation story is myth, neurotransmitters rather than demons cause mental illness, mandrake roots and dove blood don’t improve female fertility or cure skin diseases, and the cognitive structures of the human mind predispose us to certain kinds of religious belief.

6. Promoting holy war is evil.What first flipped my bit, what transformed me from an agnostic into an outspoken full-time antagonist of Bible worship was a conversation with my Evangelical relatives about the Iraq war. From the vantage of my relatives and my childhood church “family,” George Bush needed no diplomatic or cultural expertise; he was Born Again. He didn’t need to seek input from his earthly father about the invasion, because he asked his Heavenly Father. Besides, Jesus is coming soon and war in the Middle East is predicted in the Bible. That makes it not only inevitable, but—in a manner of speaking—desirable.

7. Abusing and killing queers is evil.The Bible’s clobber verses may be open to interpretation, but the fact that those verses have caused centuries of suffering is not. For much of American history, the common term for queer was the biblical “sodomite,” implying that gays are so offensive to God that they pose a threat to society as a whole. Thanks to Christian missionaries, African and Latin American queers also have now lived for centuries now under the threat of violent death.

8. Destroying Earth’s web of life and impoverishing future generations is evil.The book of Genesis may say that only man is made in the image of God and that God gave man dominion over everything that grows or walks the earth. The book of Matthew may say that the return of Jesus is imminent and that his disciples shouldn’t worry about tomorrow, which will take care of itself. The book of Revelation may teach that this world is just a prelude to streets of gold.   But some of us think the lives and loves of other species have moral weight of their own. And some of us think that the intricate web that gave us birth is both precious and precarious, and that the wellbeing of future generations matters.

9. Trying to suck vulnerable people into your poorly researched worldview is evil. It’s one thing to latch onto the supernatural worldview you were raised in or the one that first triggered for you some radically cool temporal lobe micro-seizure or similar altered state. But then failing to do your homework before using your position of adult American privilege to foist your religion on kindergarteners, or families who live in desperate poverty, or people who just got hit by a natural disaster—in other words people who trust you because you are older or richer or more powerful or have more access to the very information that you have failed to use—now we’re talking about a violation of ethics. Just because something is legal doesn’t make it right.


It is quite an indictment, but all too true.

Very good and to the point article. Christofascism is the biggest threat to America and our freedoms that people will have to fight for during this century.