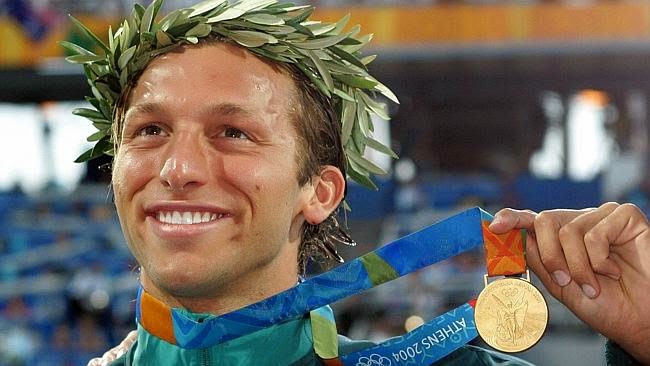 Ending years of speculation and by his own admission, many years of struggle and depression, Australian Olympia Ian Thorpe has come out as gay.  A piece in the Daily Telegraph has details and as one who was in the closet for decades, I identify with Thorpe's description of the emotional struggle he fought.  The closet is a horrible, unhappy place.  Kudos to Thorpe and I hope he finds self-acceptance and happiness.  No one should suffer because of the small minded, religious based bigotry of those who due to their own psychological issues cling to the idiocy in a few passages in the Bible authored by those who would be deemed utterly ignorant by today's knowledge. Here are article highlights:

The 31-year-old confirms his sexuality for the first time Sunday in an exclusive interview on Channel 10, telling all to veteran British interviewer Sir Michael Parkinson.

It’s understood the interview, which Parkinson has described as one of the best he has ever conducted, includes a full admission from Thorpe that he is gay despite having dated women in the past.

In the emotional sit-down shot last month, Thorpe also details the years of depression he has battled while denying his sexuality from the world. Part of that concealment included his own autobiography This Is Me, published in 2012, in which Thorpe wrote that he found questions about his sexuality hurtful.

Parkinson said he thought the interview was “one of the best” he had ever done.  “I think his sexuality is no one’s business but his own. But I think it’s one of the best interviews I have ever done in terms of (Thorpe) talking about depression and things like that,” he said.

Gold medal-winning diver Matthew Mitcham, who also has revealed he is gay, said last night he hoped Australians supported Thorpe. “I can totally understand how difficult this whole process has been for him,” Mitcham said.

“I really hope this process gives him some peace and that the media and the public give him the same respect and the same overwhelming support I received in 2008. The Australian public and media have a really wonderful opportunity to set an example for kids who are in Ian’s position.”

Thorpe is among a growing list of international athletes who have come out publicly, including UK Olympic diver Tom Daley, NBA player Jason Collins and NFL star Michael Sam.

I look forward to the day when young gays can simple be who they are and not go through the years of living hell fueled by professional Christians and hate groups that dishonestly describe themselves as "family values" focused.  Hate and bigotry are NOT family values.
Posted by Michael-in-Norfolk at Sunday, July 13, 2014