The Origins and Role of Same-Sex Relations in Human Societies 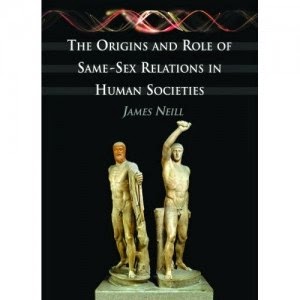 Last evening, two friends - both historians - gave a dinner party for the husband and me as a "wedding gift."  The group also included four other friends and we had a delightful time.  An additional gift was a book entitled "The Origins and Role of Same-Sex Relations in Human Societies," the end product of over ten years of historical research.  Among other things, the book concludes that acceptance of homosexuality and bisexuality on the part of much of society historically have been the norm - just as it is in many other parts of the animal kingdom - and that it was the rise of the Roman Catholic Church that lead to homophobia as we know it today.  I look forward to reading the book and will share my thoughts.  Meanwhile, here are some interview highlights with the book's author:

A principal reason the homosexual side of human sexuality became non-normalised in Western society is, indeed, as you suggest, due to the power and influence of monotheistic religions, not so much because of their rise, but because of the peculiar track the Christian Church took in its early centuries in attempting to define nature and the role of human sexuality within it.  Much of Christian sexual moral doctrine arose not from scripture, as many believe, but from the porridge of dualistic cults and philosophies that abounded in the late Roman Empire, and the conviction derived from them by Saint Augustine and other early church leaders that sexual pleasure is evil, and that therefore the only reason sexual activity could be justified was for the specific purpose of procreation. An obvious correlate of this dictum is that any non-procreative activity, be it intercourse using birth control, homosexuality, masturbation or even a man making love to his wife out of affection rather than for the specific purpose of producing a child, was unnatural, and therefore a sin.

While this core belief on the evil associated with sex and the natural purpose of sex dominated
Christian moral thinking on sexuality well into the 20th century, it actually took until the late Middle Ages in Europe before the church was finally able to exert the forces necessary to enforce its anti-sexual morality among the European population, and that only after several centuries of sometime very violent suppression.  Because of the severe opprobrium that then became attached to the homosexual side of human sexuality—the sin we dare not name—and the extreme phobia Western society developed towards it, society in effect went into total denial about its existence.

Hundreds of anthropological studies over the last century, covering tribal people in every part of the world, have shown that same-sex behaviour in one form or another was virtually universal among indigenous tribal peoples before westernization and the arrival of Christian missionaries.  Considering the prevalence of ambisexual practices among those tribal cultures unaffected by Western moral influences, there is considerable irony in the assumption of many scholars until only recently that homosexuality is a product of decadent urbanized societies and unknown among tribal peoples.

Among traditional Native-American peoples in contemporary America, same-sex relationships among adolescents are taken for granted and are tolerated as long as the individuals settle down and get married by their mid-20s.

[E]arly Christian leadership did not rely on scripture as the basis for its moral teaching on sex, but drew on two pagan sources: 1) the Stoic concept of “nature”, which led to the Christian concept of a natural purpose of sex—procreation, and 2) the anti-material, anti-sexual convictions of dualist cults and pagan Neo-Platonism—the latter was a heavy influence on St. Augustine who was the most influential of the Church Fathers in the development of Christian sexual morality.  Because non-procreative sexuality was “unnatural” and therefore sinful, the only legitimate sexual expression was heterosexual, hence the “Heterosexual Myth”.