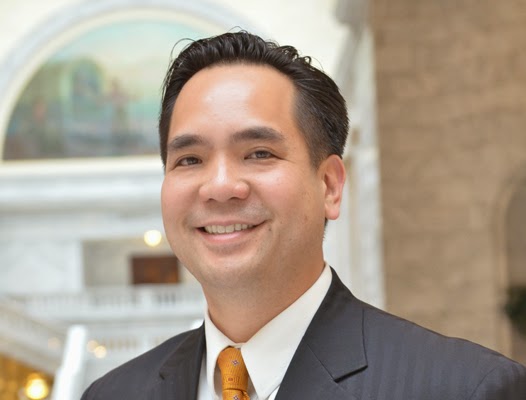 The disingenuousness (can we say lies?) of anti-gay bigots and their whore like minions in the Republican Party at times seems to know no limits.  In the wake of the 10th Circuit Court of Appeals ruling that Utah must recognize same sex marriages performed in Utah before the stay of the U.S. District Court ruling striking down Utah's gay marriage ban, Utah Attorney General Sean Reyes (pictured above) has filed a 35-page emergency stay request U.S. Supreme Court.  In the filing, Reyes claims that recognizing the roughly 1000 marriage would cause harm to the state of Utah. How?  The same old usual bullshit arguments that have been rejected by U.S. District courts across the country, not to mention the 10th Circuit.  The New Civil Rights Movement looks at Reyes' batshitery:

The 10th Circuit federal Court of Appeals Friday evening ruled that a stay requested by the State of Utah will indeed expire and the State will have to recognize the legal civil marriages of about 1300 same-sex couples performed in December and January, unless the Supreme Court were to intervene.
This evening, Utah Attorney General Sean Reyes filed a 35-page emergency request for a stay with U.S. Supreme Court Justice Sonia Sotomayor.

"Absent a stay," Reyes' petition claims, "there is a likelihood—indeed, a certainty—of irreparable harm to the State" should it be forced to recognize the 1300 legal civil marriages of same-sex couples.

Reyes claims recognizing the 1300 "interim marriages," as he calls them, will "moot the novel issues involved," denying the courts an opportunity to examine them.

The Utah Attorney General forgets that these marriages do not represent legal issues, but people -- the very citizens he claims "are better served by obtaining complete, final judicial resolution of these issues."

Reyes also seemingly chastises the Supreme Court in advance -- declaring the State of Utah "will be irreparably harmed without a stay. In denying a stay pending appeal, this court is running roughshod over state laws which are currently in force. It is disingenuous to contend that the State will suffer no harm if the matter is not stayed; undoing what is about to be done will be labyrinthine and has the very real possibility to moot important issues that deserve serious consideration."

Despite the Supreme Court's decision last summer in Windsor, striking down Section 3 of DOMA, and despite several dozen rulings in federal courts -- all favorable to same-sex marriage -- Reyes claims "the State has shown a likelihood of success on the merits."  Hardly.

The Salt Lake Tribune tonight reminds that just last week at the 10th Circuit, a "panel of three judges — the same panel which upheld another federal judge’s ruling that invalidated Utah’s ban on same-sex marriage because he found it violates citizens’ Fourteenth Amendment rights — declared Utah failed to prove it would suffer irreparable harm in recognizing the marriages and didn’t demonstrate that the state is likely to prevail in its appeal."

The reality is that the only "harm" will be that Christofascists will not be able to deprive 1000+ same sex couples equality under the civil laws and not be able to inflict their toxic, hate based religious beliefs on all the citizens of Utah.