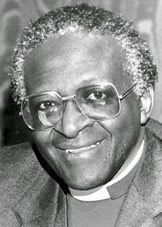 Modern conservative Christianity is defined by its adherents' hatred of others and discrimination against those who look different, love differently, or fail to adhere to their toxic hate and fear based religious beliefs.  It is the same mindset that has distinguished conservative Christians over the year as they have supported slavery, supported segregation, railed against women's rights and, of course, sought to denigrate and stigmatize LGBT individuals.  Conservative religion's wake always seems to involved ruined lives so that the "godly folk" can congratulate themselves on the piety.  Archbishop Desmond Tutu has been a loud and consistent critic of these modern day Pharisee types and is again speaking out against religious based homophobia which he calls the new apartheid.  Here are highlights from The Advocate:

Archbishop Desmond Tutu, who was a seminal figure in the fight against apartheid in South Africa, said in an interview with NBC News' Ann Curry that he would rather go to hell than to a heaven reigned over by a homophobic God.

"I am absolutely, utterly and completely certain that God wouldn't be…homophobic," Tutu told Curry, reiterating a sentiment he articulated more than a year ago at a rally hosted by the United Nations Human Rights Office in Cape Town, South Africa.

The retired Anglican archbishop also said that oppression of LGBT people is the "new apartheid." As he has in the past, the Nobel Peace Prize-winner spoke disapprovingly of the use of religion as a weapon to oppress gays. Since many antigay activists cite the Bible as justification for their views, Curry asked Tutu how he reconciled his desire for acceptance of LGBT people with the Bible.

Asserting that he cannot rest in retirement while discrimination against LGBT people thrives in many parts of the world — not least throughout much of Africa — Tutu called for an end to the oppression of people because of their sexual orientation.

"God sits there and weeps, because God says you know what, you're all my children, you're all members of one family — my family," Tutu said during the interview. "And when are you going to learn to live amicably together?"