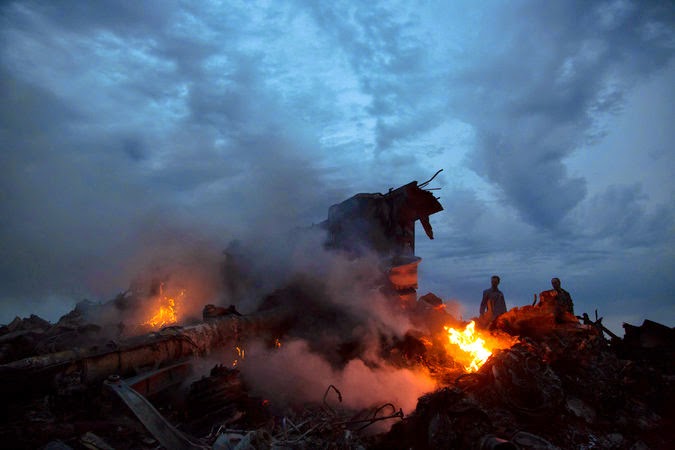 Driven by a huge ego and a fantasy of returning to the glory days of the Russian Empire, Vladimir Putin has continued to fan the flames of civil war in Ukraine - a war largely drawn along religious lines with the Catholic west of Ukraine seeking closer ties to Europe while the Orthodox east seek Russian ties.  Now, based on reports so far, it appears that pro-Russia separatists shot down a Malaysian Airlines jetliner with 298 civilians aboard.  Sadly, Putin could end this conflict by cutting off supplies to the separatists, but likely will not given his insatiable ego and maniacal desire to restore Russia to greatness even as his own corrupt policies hold it back  The New York Times reports on the latest victims of Putin's ego.  Here are highlights:

A Malaysia Airlines Boeing 777 with 298 people aboard exploded, crashed and burned on a flowered wheat field Thursday in a part of eastern Ukraine controlled by pro-Russia separatists, blown out of the sky at 33,000 feet by what Ukrainian and American officials described as a Russian-made antiaircraft missile.

Ukraine accused the separatists of carrying out what it called a terrorist attack. American intelligence and military officials said the plane had been destroyed by a Russian SA-series missile, based on surveillance satellite data that showed the final trajectory and impact of the missile but not its point of origin.

There were strong indications that those responsible may have errantly downed what they had thought was a military aircraft only to discover, to their shock, that they had struck a civilian airliner. Everyone aboard was killed, their corpses littered among wreckage that smoldered late into the summer night.

Russia’s president, Vladimir V. Putin, blamed Ukraine’s government for creating what he called conditions for insurgency in eastern Ukraine, where separatists have bragged about shooting down at least three Ukrainian military aircraft. But Mr. Putin did not specifically deny that a Russian-made weapon had felled the Malaysian jetliner.

Flight 17, which had been bound for Kuala Lumpur, the Malaysian capital, from Amsterdam with 283 passengers, including three infants, and 15 crew members. Aviation officials said the plane had been traveling an approved and heavily trafficked route over eastern Ukraine, about 20 miles from the Russia border, when it vanished from radar screens with no distress signal.

Mr. Najib said he had spoken with the leaders of Ukraine and the Netherlands, who promised their cooperation. He also said that he had spoken with President Obama, and that “he and I both agreed that the investigation must not be hindered in any way.” The remark seemed to point to concerns about evidence tampering at the crash site, which is in an area controlled by pro-Russia insurgents.

By Thursday night, American intelligence analysts were increasingly focused on a theory that rebels had used a Russian-made SA-11 surface-to-air missile system to shoot down the aircraft and operated on their own fire-control radar, outside the checks and balances of the national Ukrainian air-defense network.

In Amsterdam, a Malaysia Airlines official, Huib Gorter, said the plane had carried 154 Dutch passengers; 45 Malaysians, including the crew; and 27 Australians, 12 Indonesians, nine Britons, four Belgians, four Germans, three Filipinos and one Canadian. The rest of the passengers had not been identified.