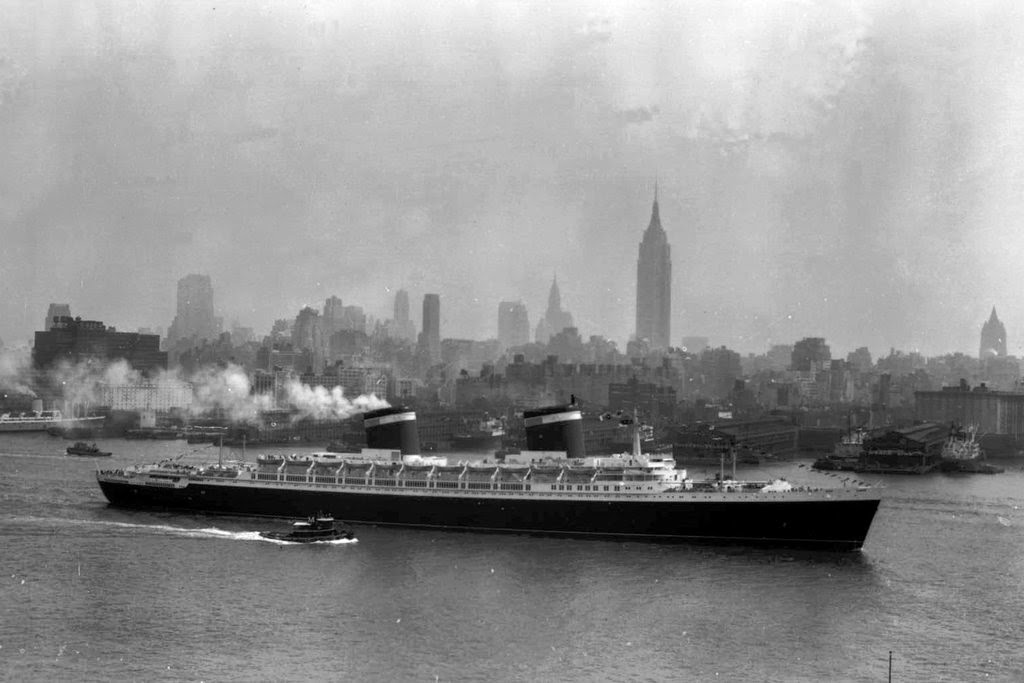 The super liner SS United States was built less than 10 miles from where I live and there are many in the area still living who worked on its construction.  To this day it holds the speed record for Atlantic crossings by an ocean liner - its top speed still unknown, but having averaged 44 miles per hour on one crossing.  Not bad for a ship 990 feet long.  Built in 1952 (the year of my birth) the United States was among the last of the great liners that once were representatives of national pride and prestige.  Now the ship lies tied up in Philadelphia- for years it languished in Norfolk where I had the opportunity to go on board -  and her fate is uncertain although there is talk of moving her to New York City for conversion into a hotel/convention venue.  A piece in the New York Times looks at the ship which should be preserved as a national symbol.  Here are excerpts:

Once upon a time, it carried princes and potentates across the Atlantic in high style and at great speed.


Then it was towed ignominiously to Ukraine where the partitions and bulkheads that once divided luxurious cabins and glittering ballrooms were torn out to remove acres of asbestos.

And since 1996, the steamship United States has been tied to a Delaware River pier beside a South Philadelphia shopping mall, while chunks of paint peel off its black hull and red-and-white funnels.
Now, the 990-foot-long ocean liner that plied the Atlantic from 1952 until 1969 is the focus of what its financially struggling owner, the SS United States Conservancy, says is a final effort to save it from the scrap yard.

Saying the ship could be only months away from being broken up, the conservancy is in talks with three developers about its potential to become a hotel, museum, shopping and restaurant mall, entertainment complex, conference center, educational facility, or some combination of all options for reuse.

Conservancy officials say the ship has about 500,000 square feet of usable space that represents both a business opportunity and a means of rescuing the historic vessel, 45 years after losing its trans-Atlantic market to commercial aviation.

Scrapping the ship would destroy a piece of American social history and an engineering landmark that still holds the record for the fastest trans-Atlantic crossing by an ocean liner, said Susan L. Gibbs, executive director of the conservancy and granddaughter of the ship’s designer, William Francis Gibbs.   “There is no other American ocean liner left,” she said in an interview. “This is the last one.”

Redevelopment is expected to cost $170 million to $300 million, depending on the combination of uses, and “seed capital” of about $15 million will be needed for an initial phase of the project, Mr. McSweeney said. Putting the ship back into the cruise market could cost as much as $1 billion, which is too expensive to contemplate, he added.

He declined to identify the potential developers but said all would move the ship to New York, its former home port, where its commercial potential would be most likely to be realized.

Mr. McSweeney said that the conservancy — which bought the ship from Norwegian Cruise Line for $3 million in 2011 — also considered locating the ship in Miami, Baltimore, Boston and Philadelphia and other cities but that none matched New York.

The ship’s future may have parallels with the Rotterdam, another liner that sailed the Atlantic for Holland America Line from 1959 until 1997, and is now a mixed-used center in its home port.
After leaving service as a liner, the Rotterdam was bought by a Dutch government-backed company for 250 million euros and converted into spaces for businesses.

Since 2010, it has been occupied by shops and restaurants, a theater, a meeting center and a hotel, which together attract about 500,000 visitors a year, according to Casper van Hooren, a former investor in the project and now an adviser to the SS United States Conservancy.

Mr. van Hooren said the Rotterdam’s businesses over all are profitable, and he predicted that the liner United States would succeed as a result of New York’s many tourists.

Inside the ship, cabins once occupied by notable figures such as the Duke and Duchess of Windsor, Harry Truman and Rita Hayworth are now marked by low dividers in the steel floor, while the ballroom where Duke Ellington once played for first-class passengers in tuxedos and ball gowns is a dimly lit shell overhung with disconnected pipes and wiring.

America routinely destroys its historic buildings and sites.  I hope the United States is saved.  If moved to New York City, we'd certainly visit it.
Posted by Michael-in-Norfolk at Thursday, July 17, 2014