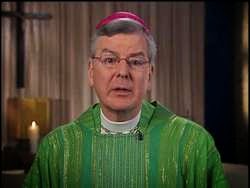 One of the things this blog tries to expose is hypocrisy be it in the political or religious realm.  In the religious realm, perhaps no situation involves more hypocrisy than that swirling around John C. Nienstedt, Roman Catholic archbishop of St. Paul and Minneapolis, who has been among the most anti-gay prelates in America.  Now, Nienstedt is being investigated for allegations that he himself engaged in a series of same sex relationships, many forced on others by the abuse of Nienstedt's power and position in the Church.  Nienstedt underscores the concept of "one doth protest too much" that seems to typically apply to the loudest homophobes (personally, I think Ken Cuccinelli and Rick Santorum are cut from the same cloth as Nienstedt).  A piece in the New York Times gives some history of the Nienstedt scandal and looks at the mounting demands that he resign.  Here are highlights:

Just two years ago, the Roman Catholic archbishop of St. Paul and Minneapolis was making headlines as a leader in the battle against same-sex marriage. But for the last year and a half, the archbishop, John C. Nienstedt, has been battling to hold onto his post in the face of a series of scandals, which further deepened on Tuesday with the filing of an explosive affidavit by the former chancellor of the archdiocese.

The troubles started in May 2013 when the accountant for the archdiocese pleaded guilty to stealing more than $670,000 in church funds, and intensified when the chancellor, Jennifer M. Haselberger, quit and went public that autumn with allegations that the archbishop and his inner circle had covered up the actions of pedophile priests in recent years and funneled special payments to them.

This month brought new revelations, first reported by the Catholic journal Commonweal, that Archbishop Nienstedt had earlier this year commissioned an investigation of himself in response to allegations that he had a series of inappropriate sexual relationships with men, including seminarians and priests he supervised, as he moved up the church’s hierarchy in Detroit and Minnesota.

In the latest challenge, on Tuesday, the archdiocese was surprised by a 107-page affidavit from Ms. Haselberger in which she rebuts claims made by the archbishop and his deputies in depositions taken in a sexual abuse lawsuit.

Ms. Haselberger, a canon lawyer who has worked in other dioceses, said that in her more than five years as chancellor for canonical affairs in St. Paul and Minneapolis, Archbishop Nienstedt and his top deputies disregarded warnings about priests accused of inappropriate contact with children or with vulnerable female parishioners; declined to report suspected abusers to civil authorities; failed to monitor sex offenders in the clergy; and in various ways violated the Charter for the Protection of Children and Young People written by the United States Conference of Catholic Bishops.

She said in the affidavit that “every time” she tried to warn the archbishop and his deputies about abusive priests still serving in ministry “my concerns were ignored, dismissed, or the emphasis was shifted to what was best for the priest involved.”

The accusations about mishandling abuse cases have drawn in not only Archbishop Nienstedt, but also two predecessors, including the retired archbishop Harry Flynn, who had a reputation as a healer and helped craft the American bishops’ policies on abuse. It has also prompted the archdiocese and neighboring dioceses to release the names of priests who were credibly accused of abuse, many of which were never previously disclosed.

As for the accusations about his own same sex relationships, Nienstedt's main defense has been that none of the males involved were minors.  The man epitomizes the term hypocrite.
Posted by Michael-in-Norfolk at Wednesday, July 16, 2014