The Iraq That Dick Cheney Actually Left Behind 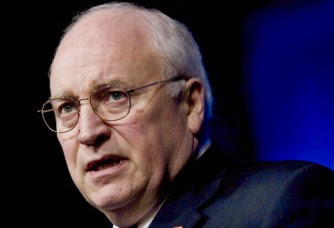 It continues to drive me crazy that much of the mainstream media continues to give Dick Cheney a platform to spew lies and fantasy stories of what should be done in Iraq.  As the main architect of America's most disastrous foreign policy since at least Vietnam, Cheney has been wrong on everything and has caused the nation to throw away thousands of young American lives and to bankrupt the nation.  Why does anyone sane listen to the man and why does anyone responsible let him have a microphone?  Think Progress reports on the Iraq that Bush/Cheney really left us as opposed to the delusional image that Cheney, a war criminal in may view, tries to paint.  Here are excerpts:

Former Vice President Dick Cheney appeared on CNN on Tuesday, once more claiming that the Iraq his administration left behind was a “very stable” one. In actuality, on the waning days of the Bush administration, Iraq was still a highly violent place, with car bombs exploding and government officials targeted.

“I think when we left office, we had in Iraq a very stable situation,” Cheney told CNN’s Jake Tapper. “We’d put together a program with a surge the a decision the president made and by the time we left office, Iraq was in good shape.”

Contrary to his claims, the Iraq that Cheney and the rest of the administration parted with was not one that was in good shape. During the Iraq War, McClatchy’s Washington Bureau ran a daily round-up of violence that had taken place in the country. While stressing that it was not a comprehensive list, on January 18, 2009 — two days before the Obama administration took office — at least six roadside bombs were detonated in Iraq, five in Baghdad and another in Mosul. Nineteen people were wounded in those explosions.

Those bombs weren’t the only violence in the country that day. A magnetic bomb planted under a car in Basra exploded, wounding the prison employee driving. Three mortar shells hit the Jamiaa neighborhood of Baghdad. And an Iraqi politician was assassinated: “A suicide bomber targeted the former major general Hassan Zaidan, whose son Falah is a parliament member of the national dialogue, at the Haj Ali village in Qaiyara (south of Mosul) around 6 p.m. Zaidan was killed in that incident.”

The next day, the last day in office of Vice President Cheney, saw another five roadsides bombs detonated. Three were in Baghdad, the other two in Mosul, with the combined explosions killing one — a captain in the Ministry of the the Interior — and wounding another 18.

Cheney also turned down the chance to take any sort of responsibility for the current crisis that Iraq is going through. Iraq’s parliament finally named a new speaker, but the fate of current Iraqi Prime Minister Nouri al-Malaki is still up in the air. Though formerly strongly supported by the United States, al-Maliki has been increasingly seen as overly biased towards his fellow Shiites and unable to reconcile the political crisis Iraq is going through.

Cheney belongs either in a mental hospital or, better yet, at The Hague on trial for war crimes.  CNN and other media outlets that want to be considered legitimate as opposed to Fox News light need to cease giving the man a stage.