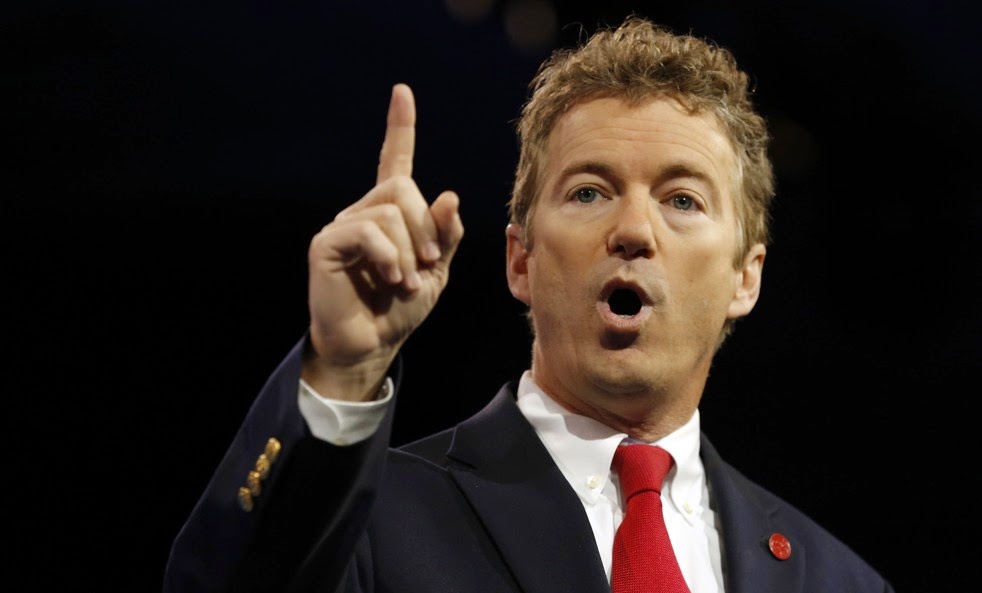 Few things offer more spectator sport than watching Republicans get into a cat fight - especially when the Republicans involved have presidential aspirations.  The two combatants are Rick Perry - who at times makes Chimperator George W. Bush look remotely intelligent - and Rand Paul who continues to rock the GOP boat by not following in lock step with war criminals like Dick Cheney.  The latest set to involves Rand Paul's foreign policy positions which (i) Perry called isolationist, and (ii) unlike so much that comes out of today's GOP has shimmers of common sense in it.  Granted not always a lot, but  compared to Perry, Paul is the new Einstein.  In an op-ed in Politico, Paul fires back at Perry and gets in some memorable quotes - memorable especially to those of us who have had family and loved ones serve in the U.S. military in the Bush/Cheney fool's errand in Iraq.  Here are column highlights:

There are obviously many important events going on in the world right now, but with 60,000 foreign children streaming across the Texas border, I am surprised Governor Perry has apparently still found time to mischaracterize and attack my foreign policy.

Governor Perry writes a fictionalized account of my foreign policy so mischaracterizing my views that I wonder if he’s even really read any of my policy papers.

In fact, some of Perry’s solutions for the current chaos in Iraq aren’t much different from what I’ve proposed, something he fails to mention. His solutions also aren’t much different from President Barack Obama’s, something he also fails to mention. Because interestingly enough, there aren’t that many good choices right now in dealing with this situation in Iraq.

He writes in the Washington Post, “the president can and must do more with our military and intelligence communities to help cripple the Islamic State. Meaningful assistance can include intelligence, surveillance and reconnaissance sharing and airstrikes.”  The United States is actually doing all of this now.

But the governor and I do have at least one major foreign policy difference, something Perry also conveniently fails to mention.

Said Perry forthrightly during a Republican presidential primary debate in 2012, “I would send troops back into Iraq.” Obviously, this is something he advocated long before the rise of ISIS. At the time, Perry urged the United States to return troops to Iraq to act as a balance against Iran, a country my colleague Sen. Lindsey Graham says we must work with to help beat back the extremists.
Does Perry now believe that we should send U.S. troops back into Iraq to fight the Iranians—or to help Iran fight ISIS? As everyone agrees, governor, there are no easy options.

Unlike Perry, I oppose sending American troops back into Iraq. After a decade of the United States training the Iraq’s military, when confronted by the enemy, the Iraqis dropped their weapons, shed their uniforms and hid. Our soldiers’ hard work and sacrifice should be worth more than that. Our military is too good for that.

I ask Governor Perry: How many Americans should send their sons or daughters to die for a foreign country—a nation the Iraqis won’t defend for themselves? How many Texan mothers and fathers will Governor Perry ask to send their children to fight in Iraq?

I will not hold my breath for an answer. If refusing to send Americans to die for a country that refuses to defend itself makes one an “isolationist,” then perhaps it's time we finally retire that pejorative.