Now Broke and Swmimming in Red Ink, Kansas Was Supposed to be the GOP’s Tax-Cut Paradise. 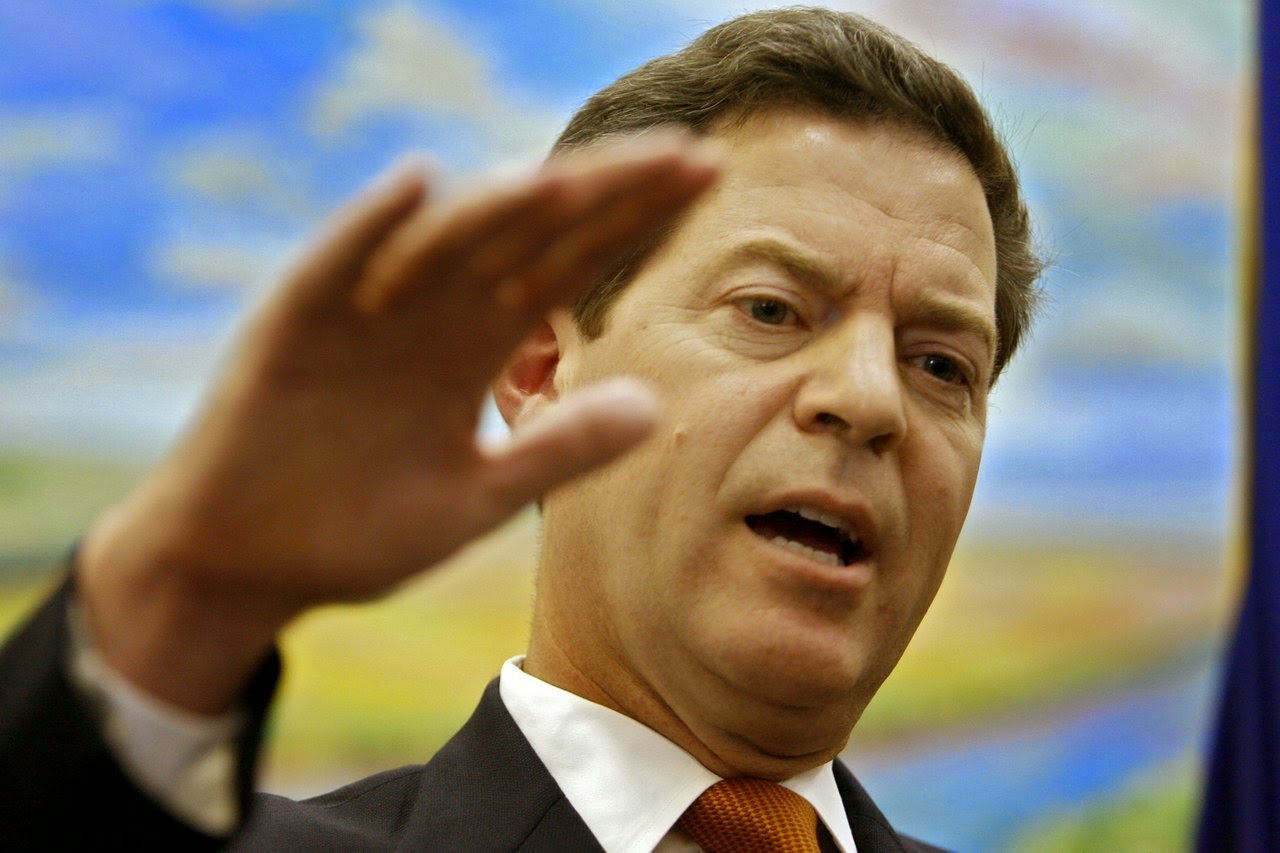 If one wants to see in microcosm what GOP fiscal policy of tax cuts and promised economic growth would actually do to America, look no farther than Kansas were unrestrained tax cuts of GOP voodoo economics have stunted economic growth and left the state struggling to pay its bills.  Seeming oblivious to objective reality and unable to learn from past experience, the GOP and it's Tea Party lunatics continue to call for precisely the policies that have proved disastrous in Kansas.  A piece in the Vox looks at the damage Gov. Sam Brownback (pictured above) and the GOP have wrought on Kansas.  Here are highlights:

In 2012, Kansas governor Sam Brownback signed a massive tax cut into law, arguing that it would boost the state's economy. Eventually, he hoped to eliminate individual income taxes entirely. "Our place, Kansas, will show the path, the difficult path, for America to go in these troubled times," he said.

National conservative activists raved. Patrick Gleason of Americans for Tax Reform said Kansas was "the story of the next decade." The Cato Institute praised Brownback's "impressive" tax cuts and gave him an "A" on fiscal policy. And the Weekly Standard's Bill Kristol said that, if reelected, Brownback would be "a formidable presidential possibility."

Yet though Brownback is running for reelection this fall in a deep red state, he's trailed his Democratic challenger in 3 of the 4 most recent polls — and his marquee tax cut appears to be the main reason. Kansas is now hundreds of millions of dollars short in revenue collection, its job growth has lagged the rest of the nation, and Moody's has cut the state's bond rating. "Governor Brownback came in here with an agenda to reduce the size of government, reduce taxes, and create a great economic boom," says University of Kansas professor Burdett Loomis. "Now there's been a dramatic decline in revenues, no great increase in economic activity, and we've got red ink until the cows come home."

The bill's estimated price tag rose from about $105 million to $800 million, but Brownback kept supporting it anyway. "I'm gonna sign this bill, I'm excited about the prospects for it, and I'm very thankful for how God has blessed our state," he said.

Democrats, and some Republicans, weren't buying it. "It bankrupts the state within two years," said Rochelle Chronister, a former state GOP chair who helped organize moderate Republicans against Brownback's agenda. And the House Democratic leader, Paul Davis, laid down a marker. "There is no feasible way that private-sector growth can accommodate the price tag of this tax cut," he said. "Our $600 million surplus will become a $2.5 billion deficit within just five years." In return, Brownback's administration claimed the bill would create 23,000 jobs by 2020, and would lead 35,000 more people to move to Kansas.

Yet it's now clear that the revenue shortfalls are much worse than expected. "State general fund revenue is down over $700 million from last year," Duane Goossen, a former state budget director, told me. "That's a bigger drop than the state had in the whole three years of the recession," he said — and it's a huge chunk of the state's $6 billion budget. Goossen added that the Kansas's surplus, which had been replenished since the recession, "is now being spent at an alarming, amazing rate."

The declining revenues have necessitated extensive cuts in state education funding, according to the Center on Budget and Policy Priorities. Moody's cut of the state's bond rating this May was another embarrassment. And the economic benefits Brownback promised haven't materialized either. Chris Ingraham wrote at Wonkblog that Kansas's job growth has lagged behind the rest of the country, "especially in the years following the first round of Brownback tax cuts."

Brownback's approval rating has plummeted — in a recent poll by PPP, his 33 percent was actually lower than Barack Obama's 34 percent approval. This is good news for state House Democratic leader Paul Davis, who announced his run for governor last September. "I'm profoundly troubled by the direction our state has been heading over the past three years," he said in his first campaign email. "The wealthiest and well connected have gotten all the breaks, and the Kansas economy feels broken." In the most recent poll of the race, Davis leads Brownback by 6 points.