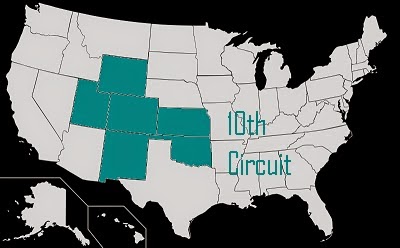 As it did with Utah's anti-gay animus based Christofascist backed ban on same sex marriage, yesterday the United States Court of Appeals ruled that Oklahoma's similar ban was likewise unconstitutional under the equal protection clause of the United States Constitution (meanwhile, here in Virginia, the 4th Circuit continues to sit on its thumbs and has not released its ruling in the Bostic appeal).   Meanwhile, the Supreme Court yesterday stayed the 10th Circuit's ruling in the Utah case pending the outcome of Utah's desperate last ditch effort to allow Christofascists to force their religious beliefs on all Americans.  Here are highlights from the Tulsa World on the 10th Circuit decision:

The 10th Circuit Court of Appeals ruled 2-1 that the ban violates the U.S. Constitution’s guarantee of equal protection under the law for everyone.

“States may not, consistent with the U.S. Constitution, prohibit same-sex marriages,” the judges wrote.  The court stayed its opinion, putting it on hold pending an expected challenge.

Fallin criticized the court’s decision in a prepared statement.

“Today’s ruling is another instance of federal courts ignoring the will of the people and trampling on the right of states to govern themselves,” Fallin said. “In this case, two judges have acted to overturn a law supported by Oklahomans. Their decision will be appealed and, I hope, overturned.”

Friday’s 46-page decision by the two-judge majority rejected arguments by opponents of same-sex marriages that children have an interest in being raised by their biological parents and that a ban on same-sex marriages is valid because only opposite-sex couples are capable of being procreative.

The Court's full decision can be read here.  It is noteworthy that Gov. Fallin favors mob majority rule and conveniently forgets that once upon a time majorities favored slavery, and  later segregation and bans on bans on interracial marriage. Just because a majority supports something doesn't make it right or constitutional.  As noted many times before, I long for the day when Christians are a minority in America and when what they have sown may come back to haunt them severely.  Suddenly, you will not hear them preach for mob majority rule.