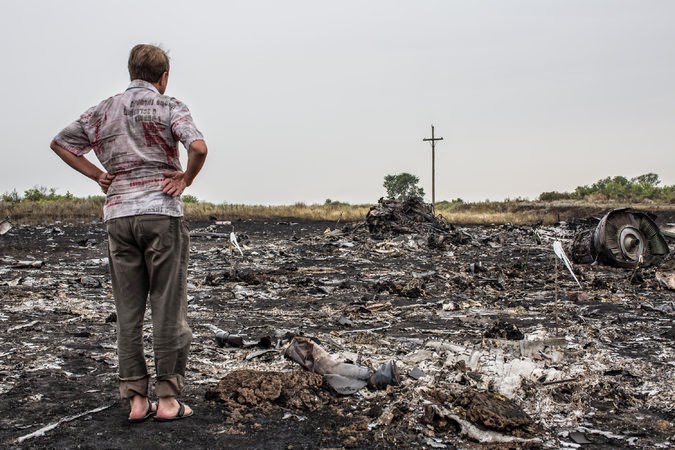 While we are nearing the 100th anniversary of World War I, events in Ukraine and the downing of a civilian airliner by Russia backed separatists/terrorists is in some ways more reminiscent of the eve of World War II when Adolph Hitler used a doctrine now being copied by Vladimir Putin to justify the invasion of Czechoslovakia, then Austria, and then Poland: protecting ethic Germans just as Putin claims to be protecting ethnic Russians.  Recently Andrew Sullivan aptly described Putin as a 21st century would be fascist Tsar.  An even better description would be to say it like it is: Putin is recycling Hitler's dangerous agenda both in terms of the claims to be "protecting" ethnic Russians and of scapegoating minorities like gays to fuel xenophobia.  A column in the New York Times calls out Putin.  Here are excerpts:


In 1994, I was half asleep at a round table in St. Petersburg, Russia, when a short, thickset man with a rather ratlike face — apparently a sidekick of the city’s mayor — suddenly piped up. Russia, he said, had voluntarily given up “huge territories” to the former republics of the Soviet Union, including areas “which historically have always belonged to Russia.” He was thinking “not only about Crimea and northern Kazakhstan, but also for example about the Kaliningrad area.” Russia could not simply abandon to their fate those “25 million Russians” who now lived abroad. The world had to respect the interests of the Russian state “and of the Russian people as a great nation.”

The name of this irritating little man was — you guessed it — Vladimir V. Putin, and I know exactly what he said back in 1994 because the organizers, the Körber Foundation of Hamburg, Germany, published a full transcript. For the phrase that I have translated as “the Russian people,” the German transcript uses the word “volk.” Mr. Putin seemed to have, and still has, an expansive, völkisch definition of “Russians” — or what he now refers to as the “russkiy mir” (literally “Russian world”).

The transcript also records that I teased out the consequences of the then-obscure deputy mayor’s vision by saying, “If we defined British nationality to include all English-speaking people, we would have a state slightly larger than China.”

Little did we imagine that, 20 years later, the St. Petersburg deputy mayor, now uncrowned czar of all the Russians, would have seized Crimea by force, covertly stirred up violent mayhem in eastern Ukraine and be explicitly advancing his 19th-century völkisch vision as the policy of a 21st-century state.
It is impossible to overstate the degree to which this is a threat not just to Russia’s Eastern European and Eurasian neighbors but to the whole post-1945 international order. Across the world, countries see men and women living in other countries whom they regard as in some sense “their people.”

Poland has expressed concern for the position of Polish speakers in Lithuania. Hungary has handed out both passports and voting rights in national elections to citizens of neighboring countries whom it deems to be members of the Hungarian people. To pin down what is illegitimate, we have to explain more clearly what is legitimate.


As of Friday, American and Ukrainian officials were saying it was likely that a Russian-made antiaircraft missile had brought down Malaysia Airlines Flight 17, in yet another harvest of sorrow on Ukrainian fields already blood-soaked by history. It was not clear who fired it. But it is hypocrisy on an Orwellian scale for Mr. Putin to maintain, as he did on Friday, that “the government over whose territory this happened bears the responsibility for this terrible tragedy.” There is undoubtedly bitter discontent among many self-identified Russians in eastern Ukraine, but the violence of their protests has been stirred by a massively mendacious narrative on Russian television, and their paramilitaries have been supported, to put it no more strongly, by Mr. Putin’s Russia — including the presence of members or former members of Russian special forces.

It is precisely the ambiguous mixtures created by Mr. Putin’s völkisch version of the “responsibility to protect” that produce such disastrous possibilities. He subverts and calls into question the authority of the government of a sovereign territory, and then blames it for the result.


So if an obscure deputy mayor starts sounding off in alarming terms at some conference you are attending, my advice is, Wake up. Of course, most such ranters do not rise to the top. But when they do, their ideologies of resentment may be written out in blood.

In the early 1930's people did not see Hitler as a serious threat and the world paid a huge price for such inattention.  Putin has all the same megalomania of Hitler and  has shown that he is only too willing to recycle the Furher's deadly tactics.   What is equally sad is that with Putin, the Russian people are again being betrayed and harmed by a failed ruler.  In Russia, history keeps repeating itself. 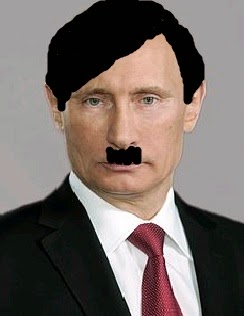