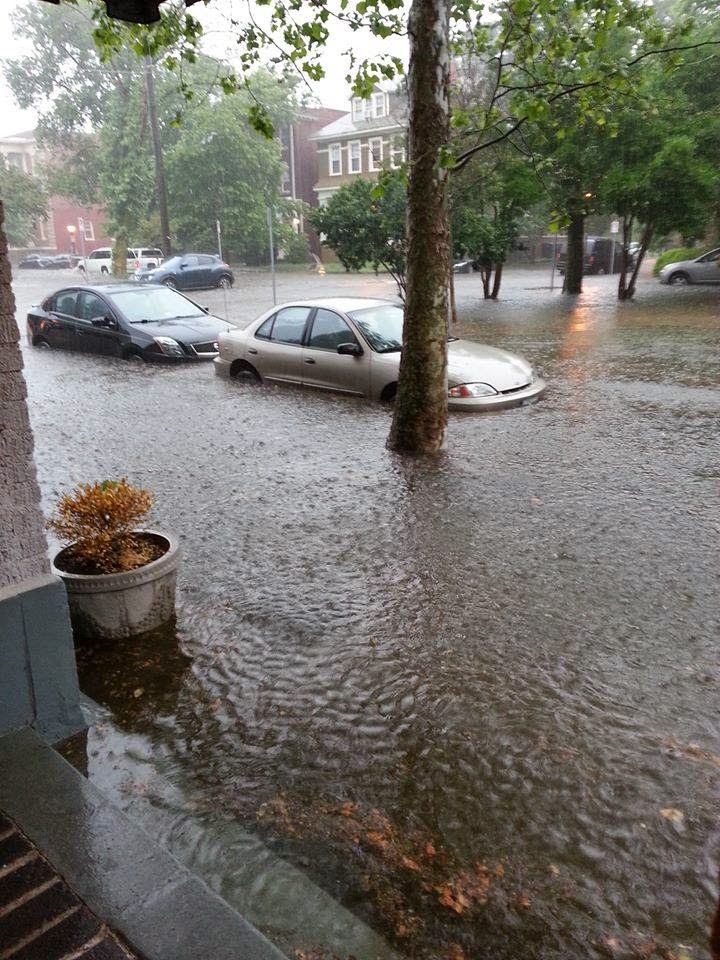 Here in Virginia, the Virginia GOP will not even allow legislative committees to use the terms "climate change," "global warming," or "rising sea levels."  The only term that the head in the sand (or perhaps nose up energy company asses) Republicans will countenance is "areas of repetitive flooding."  Never mind the findings of the vast majority of climate scientists.  Never mind the events that are unfolding such as the extreme flooding that Norfolk and other areas suffered from simply heavy rains and high tides (see the image above).  So what might force a change?  Perhaps class action lawsuits by insurance carriers against municipalities that fail take measures to address climate change threats.  Think Progress looks at one such lawsuit which could be the first of many.  Here are highlights:

Last month, Farmers Insurance Co. filed nine class-action lawsuits arguing that local governments in the Chicago area are aware that climate change is leading to heavier rainfall but are failing to prepare accordingly. The suits allege that the localities did not do enough to prepare sewers and stormwater drains in the area during a two-day downpour last April. In what could foreshadow a legal reckoning of who is liable for the costs of climate change, the class actions against nearly 200 Chicago-area communities look to place responsibility on municipalities, perhaps spurring them to take a more forward-looking approach in designing and engineering for a future made different by climate change.

“Farmers is asking to be reimbursed for the claims it paid to homeowners who sometimes saw geysers of sewage ruin basement walls, floors and furniture,” reported E&E News. “The company says it also paid policyholders for lost income, the cost of evacuations and other damages related to declining property values.”

While these suits are the first of their kind, Micahel Gerrard, director of the Center for Climate Change Law at Columbia Law School in New York, told Reuters that there will be more cases like them attempting to address how city and local governments should manage budgets to prepare for natural disasters that have been intensified by climate change.

Insurance companies are becoming increasingly concerned, and more vocal, about the rising costs of climate change. With large fossil fuel companies reluctant to take greenhouse gas mitigation efforts in the face of potential profit losses, the behemoth insurance industry could provide a counterbalance to the energy industry when it comes to incentivizing near-term emissions cuts, or at least adaptation to the effects of climate change.

“Most insurers, including the reinsurance companies that bear much of the ultimate risk in the industry, have little time for the arguments heard in some right-wing circles that climate change isn’t happening, and are quite comfortable with the scientific consensus that burning fossil fuels is the main culprit of global warming,” reported the New York Times.

“The implications of this are profound because the insurance sector is a key driver of the economy. If climate change undermines the future availability of insurance products and risk management services in major markets throughout the U.S., it threatens the economy and taxpayers as well.”