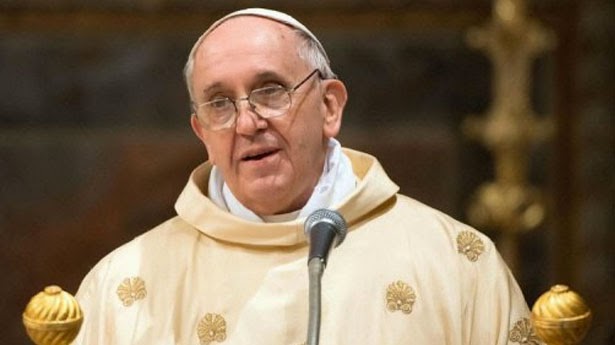 While he has done virtually nothing to change Catholic Church dogma, including its vicious homophobia and jihad against gay rights, Pope Francis has lobbed another bomb at the feet of the Republican Party.  First there was his attack on unrestricted capitalism and the growing wealth disparity across the world which diametrically opposes Paul Ryan's economic plan.  Now, Francis has made a case for addressing climate change - something that the GOP cannot even bring itself to admit exists.  One has to wonder whether Francis had the Koch brothers in mind when he mentioned self-idolatry.  Think Progress looks at Francis' statements:

Pope Francis made the religious case for tackling climate change on Wednesday, calling on his fellow Christians to become “Custodians of Creation” and issuing a dire warning about the potentially catastrophic effects of global climate change.

Speaking to a massive crowd in Rome, the first Argentinian pope delivered a short address in which he argued that respect for the “beauty of nature and the grandeur of the cosmos” is a Christian value, noting that failure to care for the planet risks apocalyptic consequences.

“Safeguard Creation,” he said. “Because if we destroy Creation, Creation will destroy us! Never forget this!”

The pope centered his environmentalist theology around the biblical creation story in the book of Genesis, where God is said to have created the world, declared it “good,” and charged humanity with its care. Francis also made reference to his namesake, Saint Francis of Assisi, who was a famous lover of animals, and appeared to tie the ongoing environmental crisis to economic concerns — namely, instances where a wealthy minority exploits the planet at the expense of the poor.

“Creation is not a property, which we can rule over at will; or, even less, is the property of only a few: Creation is a gift, it is a wonderful gift that God has given us, so that we care for it and we use it for the benefit of all, always with great respect and gratitude,” Francis said.

Francis also said that humanity’s destruction of the planet is a sinful act, likening it to self-idolatry.

The pope’s comments come on the heels of a five-day summit on sustainability convened at the Vatican earlier this month. The summit, entitled “Sustainable Humanity, Sustainable Nature, Our Responsibility,” drew together microbiologists, legal scholars, economists, philosophers, astronomers, and other experts to discuss ways for the Catholic church to address a range issues caused by climate change. In a joint statement published after the close of the conference, participants echoed Francis’ belief that environmental justice and economic justice are inextricably linked.

“Human action which is not respectful of nature becomes a boomerang for human beings that creates inequality and extends what Pope Francis has termed ‘the globalization of indifference’ and the ‘economy of exclusion’ (Evangelii Gaudium), which themselves endanger solidarity with present and future generations,” the statement read.