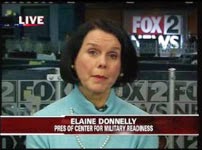 If Bob Marshall wants to be the king of GOP crazy land, Elaine Donnelly (pictured above) wants to be its queen.  Like Marshall, Donnelly is utterly obsessed with gays and has made a cottage industry career out of seeking to keep gays out of the military.   Her vehicle for this effort has been the so-called Center for Military Readiness (CMR) which, like Bill Donohue's Catholic League, is basically a two person operation.  And other than a Reagan era window dressing appointment, Donnelly has zero experience in or with the U. S. military.  But a lack of any legitimate credentials never seems to deter the faux experts of the far right, especially those claiming to support "Christian values."  Think Progress has a profile of Donnelly who, like Bob Marshall, best belongs in a mental institution.  Here are some excerpts:

In 1993, as Congress considered whether to let President Bill Clinton keep his campaign promise to lift the military’s ban on gay, lesbian, and bisexual service members, Elaine Donnelly took to CNN to warn that doing so would cost the nation millions and destroy the U.S. Armed Forces. “We don’t feel that the soldiers who defend our country should be subjected to this kind of social experimentation. It’s not fair to them. It’s not good for our national defense. And I don’t think that the Congress is going to stand for it. The American people will not stand for it.”

Donnelly’s concern wasn’t just that non-heterosexual soldiers and sailors would distract their straight colleagues — but that they might bankrupt the national treasury. If gay, lesbian, and bisexual Americans were allowed to join, she explained, they would rush to join to receive the “quite generous” medical benefits offered: “If we apply that to those who are at high risk of AIDS — we already know there are 10,000 non-deployable soldiers and their cost of care is about $200,000 each. It’s a very high amount. We’re giving an incentive to apply what is available to heterosexuals to the homosexual population, and that really is an explosive idea.”

Though her dire predictions have proven consistently wrong and her fundraising has declined significantly, more than two decades later, Donnelly and her Center for Military Readiness (CMR) are still leading the fight for discrimination in the military — now working to preserve the military’s current ban on transgender service members.

Elaine Donnelly got her start as a deputy in the fight against equal legal treatment for women, as a culture warrior under anti-feminist legend Phyllis Schlafly. In the 1970s and 80s, she served as national media chair for Schlafly’s Stop E.R.A. campaign, fighting against ratification of the proposed Equal Rights Amendment to the U.S. Constitution.

In 1984, Donnelly was appointed to the Reagan administration’s Defense Advisory Committee on Women in the Services and took part in the committee’s study on whether women should be allowed in some combat roles. Donnelly opposed the committee’s recommended expansion.

In 1993, with Schlafly’s support, Donnelly formed the Coalition for Military Readiness, soon after renamed the Center for Military Readiness. The stated mission of the tax-exempt “educational organization”: promoting “high standards and sound priorities in the making of military personnel policies,” and “defending elements of military culture that are essential for morale and readiness in the All-Volunteer Force.” Its advisory board included a who’s who of conservatives including anti-Islam activists Frank Gaffney and David Horowitz, affirmative action opponent Ward Connerly, Focus on the Family founder James Dobson, and National Review Institute president Kate Walsh O’Beirne.

For most of this time, Donnelly was the sole employee, receiving an average salary of about $50,000 annually. In some years, a small amount of money was also paid to her husband, Terry Donnelly, for admin work; the group’s executive director Tommy Sears seemingly works without pay. In 2011, Terry Donnelly told the Huffington Post, “We just try to put together enough money for Elaine to do her research,” and that CMR is their sole source of income.

In practice, CMR has been most visible in its two losing battles — the effort to keep women out of combat and to keep LGBT people out of the military.  . . . . Donnelly and CMR not only opposed the “Don’t Ask Don’t Tell” compromise from the beginning, they actively argued for a return to the days of outright prohibition.

In 2008, Donnelly traveled from her Livonia, Michigan home to Washington, DC, to address the U.S. House Armed Services Committee’s military personnel subcommittee. . . . . Raising the specter of having to allow “transgenders in the military,” “HIV positivity,” and of a “sexualized atmosphere in our Armed Forces,” she told the committee it should keep the current rule in place, but should also consider once again asking applicants their sexual orientation to avoid having to train people who are not eligible to be in the military.

The Washington Post’s Dana Milbank wrote that, “Inadvertently, Donnelly achieved the opposite of her intended effect,” and her comments “had the effect of increasing bipartisan sympathy for the cause.”

In need of a new message, the Center first moved to try to ensure the military not recognize same-sex relationships. . . . .  But this message too became largely moot last June when the U.S. Supreme Court ruled the Defense of Marriage Act unconstitutional — meaning that same-sex marriages must be equally recognized by the military.
But it appears Donnelly and her Center have recently found one more battle to fight. While the 2010 Don’t Ask Don’t Tell repeal ended the ban on allowing gay, lesbian, and bisexual Americans to serve openly, it did not end the military’s ban on transgender service members.


Seizing on a similar issue to its old favorite, the Center for Military Readiness quickly moved to claim its traditional role of chief defender of exclusion. Donnelly has already hauled out the arguments she has used so often against gay, lesbian, and bisexual service members and women in combat — now arguing that transgender inclusion would cost too much and would make people uncomfortable.

One take away from the article is the question of why the GOP gives any recognition or credence to crackpot organization like Donnelly's and far too many other "ministries" and rackets that are ultimately merely vehicles for a few nutcases to make a living peddling hatred and discrimination.  Anyone other that tawdry political whores ought to run screaming the moment they hear Donnelly's name.