Condoleezza Rice - A Portrait in Selling One's Soul for Power 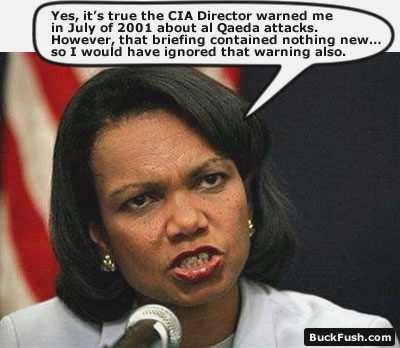 I will confess that I never have liked Condoleezza Rice who has always struck me as power mad and all too willing to sell her soul for "success" and power.  Issues of morality and even simple honesty were always too readily jettisoned if they might impede her path to power.  The irony is that along the way her greed for power ultimately turned the tables on her and she is now seen by many as a case study on how one should not so easily sell their soul.  Maureen Dowd has a delicious take down of Rice in the New York Times that ought to be required reading for every over ambitious politician, especially Republicans all too ready to sell their souls to the Christofascists/Tea Party.  Here are excerpts:

After protests about imperialism, Condoleezza Rice pulled out of her speech at Rutgers . . . For a militaristic imperialist, Rice caved awfully easily. She should have invaded Rutgers, occupied the podium and said her piece about her failures on peace. And the students shouldn’t have jumped the gun. After all, there was always a chance, a small one, admittedly, but a chance, that Condi Rice would have looked into her soul and told the story of what happens when you succumb to the temptation to sell it.

Rice always seemed to me a particularly sad part of the tragedies of Iraq and Afghanistan, and the lovely linchpin of the moral corrosion of W.’s presidency.


So how could someone named by her mother after the Italian musical notation con dolcezza, meaning “with sweetness,” end up having such a sour effect on American history? Rice was a star, but unfortunately, she cast herself in yet another production of “Faust” on the Potomac, uttering one of the most over-the-top lines of war spin ever: “We don’t want the smoking gun to be a mushroom cloud.”

She excelled at failing better. As national security adviser for W., she ignored the intelligence report warning that Osama bin Laden was determined to strike inside the U.S. And she only learned about Hamas’s shocking win in the Palestinian elections in 2006 when she was on her elliptical trainer watching the TV news crawl. After verifying it with State, she returned to exercising.

As Elisabeth Bumiller wrote in her trenchant biography of Rice, “Condoleezza Rice: An American Life”: “It was obvious from Rice’s many metamorphoses that her real ideology was not idealism or realism or defending the citadels of freedom, although she displayed elements of all of them. Her real ideology was succeeding.”


She knew that W. — eager to show he was not a wimp, the word Newsweek had once hung around his father’s neck — was leaning toward kicking some Arabs around. So she ignored the red flags raised publicly by Scowcroft and privately by Powell and made her Faustian deal to sell a fake war.
We’ll never know if she could have stopped W. from ruining his presidency and destroying so many lives when there was no national security stake.

We only know that when you sell your soul, it’s not like a pawnshop. Condi thought she could reclaim it after she was secretary of state and bring W. back to the light of diplomacy and common sense. But, as Russell Baker once noted, she was trying to put the toothpaste back in the tube, spinning her wheels in the second term trying to undo the disasters of the first.

What a wonderful lesson she could have taught those graduates about the perils of succeeding at any cost, about how moral shortcuts never lead to the right place.

Sadly, it seems few in the GOP have learned a thing from Rice's example.  Greed, the quest for power, and a rejection of moral standards remain a GOP norm.
Posted by Michael-in-Norfolk at Sunday, May 18, 2014