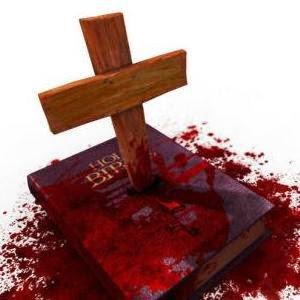 I have looked at the vile export of hatred to Uganda by American Christofascists before, but it is a story line that needs repeating because many of the same players are now targeting additional countries ranging from Russia to parts of South America.  Wherever these Christofascists go, their main export is hatred, homophobia and the embrace of ignorance.  Worse yet, they prey on populations who seemingly cannot see the evil of the Christofascists' intentions.  A piece that looks at the documentary film, “God Loves Uganda” traces the foul road map favored by the exporters of hatred.  Here are highlights:

In his documentary “God Loves Uganda”, he [Roger Ross Williams] traces the fervent homophobia to American missionaries.  The documentary focuses on the involvement of International House of Prayer, young missionaries and evangelicals Rick Warren, Scott Lively and Lou Engle in Uganda.

With Uganda’s turbulent past, Idi Amin’s murderous reign and the civil war, leaving a wake of destruction throughout the country, compiled with the country’s battle with HIV/AIDS it was a ripe destination for American missionaries and aid workers. In a Vox interview William explains, “Uganda was the perfect place for people from America to move in and help rebuild. [The Americans] did a lot of great work, but they also came in with a specific ideology of faith: that the Bible reigns supreme.

The rhetoric brought by evangelicals and missionaries has had an explosive impact. In a conference attended by thousands of Ugandans, American evangelicals, self-proclaimed “experts” on homosexuality, warned Ugandans of the evils of homosexuality.  Scott Lively, author of The Pink Swastika, animated to the crowd the supposed desire of gays to take over the world, recruit young people and how their existence destroys society by increasing divorce, child abuse, and HIV/AIDS.  He goes further stating, the legalization essentially means condoning “molestation of children or having sex with animals.”


There are several layers to the American involvement starting with the doe-eyed missionaries to well-endowed calculated neoconservative think tanks like Institute on Religion and Democracy.  Conservatives, the American evangelical community and fundamentalists feel they have lost significant ground in the US “culture war”, therefore they moved to where they can win and they are.

Ugandan politicians have encouraged this fervor of homophobia, partially because it is a distraction. It is easier to pin the ails of a country on a minority group than on the true issue – failure of government. It doesn’t hurt that many of these hate-inducing organizations are pouring millions of dollars directly into politicians and religious figures with little to no accountability, unlike foreign aid.

Atrocities keep occurring in the name of religion, usually carried out by a well-intentioned devotee, slavery, colonization, the holocaust and now murder inciting homophobia. This isn’t about whether homosexulity is moral or immoral but about people bumbling into different cultures and societies carelessly spewing rhetoric without considering or an understanding of the impact.

Religion needs to be driven from the public square and driven from the formulation of public policy.  A true review of religions fruits shows that the legacy of death, destruction - genocide in some instances - and unreasoning hatred far outweighs any periphery charitable endeavors.   Yes, nowadays there are decent denominations and good Christians, but sadly, they are in the small minority across the spectrum of the centuries.

Email ThisBlogThis!Share to TwitterShare to FacebookShare to Pinterest
Labels: American Christofascists, export of homophobia, preying on the ignorant, religion as an evil, Scott Lively, Uganda