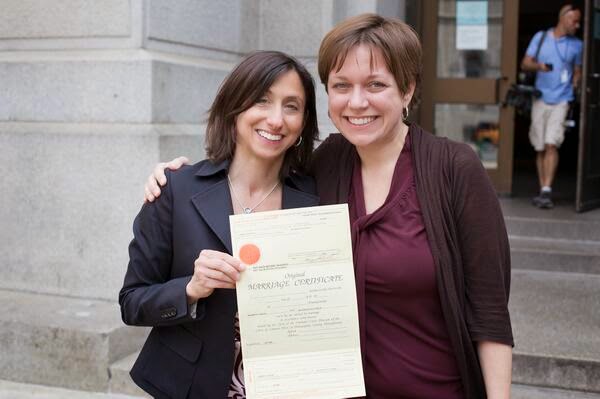 It is amazing how fast the anti-gay animus motivated state constitutional bans on same sex marriage are falling.  Today, Pennsylvania was added to the list of states where anti-gay bigotry has fallen.  And so far, no stay of the ruling has been has been issued and some couples (see image above) found judges who would waive Pennsylvania's three day waiting period have already married.  Governor Tom Corbett has indicated that he will make a statement tomorrow vis-a-vis his position on the ruling.  As you will recall, Pennsylvania Attorney General Kathleen Kane had refused to defend the ban which she concluded was unconstitutional.  Like all of the federal judges before him who have invalidated same sex marriage bans, Judge John E. Jones, III, held that the state had provided no meaningful justification for the ban.  Adding to the sweet irony of the ruling, Judge Jones was nominated to the bench by George W. Bush and former Pennsylvania Senator Rick Santorum had supported Jones' nomination.  The ruling is here.  Here are some excerpts:

[F]ar from affording the statute the presumption of validity,  Windsor  found DOMA unconstitutional because “no legitimate purpose overcomes  the purpose and effect to disparage and to injure.”  Windsor , 133 S. Ct. at 2696 (emphasis added);

The Court has . . . undertaken a more careful assessment of the justifications than the light scrutiny offered by conventional rational basis review [in examining statutes targeting women, the poor, the mentally impaired, and gays and lesbians].”). Notably, the Court’s sexual orientation jurisprudence has generally afforded considerably less deference than would be expected under usual rational-basis review.

Defendants do not advance that sexual orientation is mutable or bears a relation to ability to participate in society. Rather, they dispute only that gay and lesbian persons have suffered requisite historical discrimination and lack political power.

In terms of state interests served by Pennsylvania’s Marriage Laws, Defendants advance the following: the promotion of procreation, child-rearing and the well-being of children, tradition, and economic protection of Pennsylvania businesses. Defendants appear to defend only the first two aims, stating that numerous federal and state courts have agreed that responsible procreation and child-rearing are legitimate state interests and providing extensive authority for that proposition. Significantly, Defendants claim only that the objectives are “legitimate,” advancing no argument that the interests are “important” state interests as required to withstand heightened scrutiny. Also, Defendants do not explain the relationship between the classification and the governmental objectives served; much less do they provide an exceedingly persuasive justification. In essence, Defendants argue within the framework of deferential review and go no further.

In sum, Defendants have failed to carry their burden, and we conclude that the classification imposed by the Marriage Laws based on sexual orientation is not substantially related to an important governmental interest. Accordingly, we hold that the Marriage Laws violate the principles of equal protection and are therefore unconstitutional.

Kudos to the Court.  Same sex marriage bans have ALWAYS been aimed at harming LGBT individuals and relegating them to an inferior status under the law.   We hear ad nausea about children needing a mother and father, yet the opponents of gay equality (i) ignore the tens of thousands of children of same sex couples and (ii) provide no causation between gay marriage and heterosexual couple divorce.
Posted by Michael-in-Norfolk at Tuesday, May 20, 2014