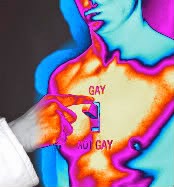 In addition to Paul Cameron - a fraudulent "researcher" thrown out of every legitimate medical and sociological association to which he was a member in 1985 - and more recently the discredited Mark Regnerus, one of the principal sources of bogus, witch doctor like "therapies," faux research utilized by the Christofascists to claim gays "can change" is NARTH - the National Association for Research and Therapy of Homosexuality.  Historically, NARTH has been funded by a who's who of anti-gay hate groups and has had ties to discredited frauds like Arthur A. Goldberg - the founder of JONAH - who is a former felon.  Now, after losing its non-profit status, NARTH seems to be re-branding and focusing on profit like so many other "ministries" and counseling centers like that of Michelle Bachmann's husband Marcus "Marcia" Bachmann.  A piece in The Bilerico Project written by Mike Airhart, with whom I had a wonderful lunch some time back in DC, looks at NARTH's latest ploys.  Here are excerpts:

The National Association for Research and Therapy of Homosexuality (NARTH), an ex-gay "think tank" that has provided junk-science arguments to the ex-gay and anti-gay political movements since 1992, appears to have evolved into a Utah for-profit corporation called Pilgrimage Resources - or, perhaps, a front for that corporation -- after NARTH allowed its non-profit status to lapse in 2012.


Yet NARTH still solicits donations on its website, inviting donors to become "partners" without telling them that their donation is non-tax-deductible and channeled to a business.

A leading champion of discredited "reparative therapy," NARTH falsely blames parents and child abuse for the development of homosexual orientation and promotes expensive "ex-gay therapy" (conducted by its "partner" therapists) to "cure" gay and lesbian persons of their presumed gender non-conformity. According to a Utah state government database, Pilgrimage Resources was registered as a corporation in February 2009 by David Clarke Pruden, NARTH's vice president of operations and the longtime president of the Mormon "ex-gay" group Evergreen.

At about the same time, NARTH stopped filing required renewals of its non-profit status with the IRS, and in 2012 the IRS discontinued that status. Currently, NARTH's website channels all donations and resource purchases through Pilgrimage Resources.

We left messages for Pilgrimage Resources and NARTH, asking:

"We would like to know why Pilgrimage Resources is registered as a corporation in Utah, what is the current status of NARTH as a registered state or federal non-profit organization, and why NARTH is channeling 'donations' through a corporation instead of a non-profit."

In addition to the anti-gay political propaganda goals of the  Christofascist hate groups, one of the big attraction of the "ex-gay" programs is the reality that they can be very lucrative as they prey on tortured, religiously brainwashed gays and, perhaps more importantly, their self-centered parents who are embarrassed to have a gay child.
Read more at http://www.bilerico.com/2014/05/is_ex-gay_group_narth_rebranding.php#WL32qy8F07vxCySJ.99
Posted by Michael-in-Norfolk at Monday, May 19, 2014