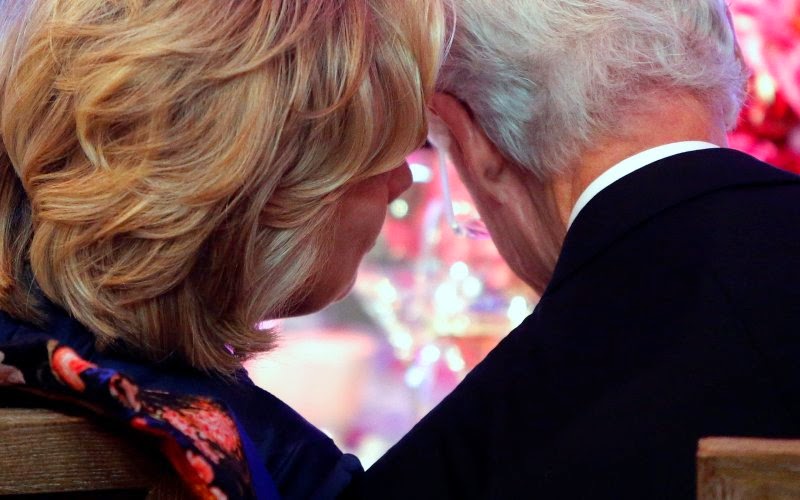 As noted in a recent blog post, some in the GOP base - and, of course some in the conservative pundit class - simply cannot let go of their hatred for the Clintons, and in some instances Hillary in particular (to far right extremists, nothing is worse than an uppity woman unless its the brain dead Sarah Palin or a black man in the White House).  It is part and parcel with the GOP's run away train swing to crazy land.  A piece in The Daily Beast looks at the Hillary hater's inability to let go of their lunacy.  Here are highlights:

They were called “The Clinton Crazies.” It was the 1990s and while the rest of the nation seemed to bask in an era of nearly unprecedented peace and prosperity, they saw all manner of dark deeds emanating from the White House. To them, Bill Clinton, enabled by his wife, was a serial rapist, a drug-runner, a closet racist, a cocaine addict, someone who ordered the murder of close friends and aides.

When Hillary Clinton referred to the Vast Right Wing Conspiracy, she meant them. They wore the epithet like a badge of pride.

It has now been two decades since American politics seemed overrun with a cadre of conservative journalists, opposition researchers, and Republican lawmakers committed to bringing down the president, despite what they saw as the mainstream media’s efforts to protect him. In those intervening years, Clinton’s approval ratings have sky-rocketed as he matures into the role of globe-trotting elder statesman. His wife frequently tops the list of most admired women in the world.

Over the last several weeks, The Daily Beast tracked down more than a dozen Clinton accusers, conspiracy mongers and dirty tricksters. Almost to a person, they look back on the Clinton years as one of the most exciting times of their lives, a time when Washington was crawling with all manner of rumor and allegation (most of which originated in Arkansas, a state largely mysterious to most Beltway types) and the presidency seemed likely to topple at any moment.

Farah [Joseph Farah, the editor of WND.com, a/k/a Wing Nut Daily on this blog] remains largely unrepentant, convinced as ever that “with Bill and Hillary there are some fundamental character problems, and I haven’t seen any improvement. They have always been very power hungry, wealth hungry, and motivated only by what is good for them.”As for the notion of a vast right-wing conspiracy, Farah and other reputed members say that it never existed.

Farah is not alone among Clinton conspirators with his lack of self-doubt about his work back in the ’90’s.  But there are some soldiers of the Clinton Wars, comrades in arms with Farah and his ilk, who look back on those days and cringe. Richard Mellon Scaife, who helped fund the so-called “The Arkansas Project”—which sent opposition researchers to Clinton’s home state to find out where the bodies (or bimbos) were buried—was once described in the New York Times as a “charter member of the vast right wing conspiracy,” but now counts himself a Clinton admirer. David Brock, a conservative journalist whose investigations helped spur the “Troopergate” investigations, today runs a liberal media watchdog site.

“Scaife and Ruddy have run from what they did,” said Farah. “Without any real explanation that makes any sense. You won’t see them talking about Vince Foster any more. They think Clinton has grown up since leaving the presidency, that he is somehow a changed man. Well, maybe they are the ones that changed.”

The fervor in right-wing circles over the Clinton presidency made media heroes out a few figures still around, like Rush Limbaugh, Ann Coulter, and Matt Drudge.

[O]thers remain in them, still battling, but with little to show for a cause they have committed so much of their life to. Kathleen Willey was a White House volunteer who said she was groped by Bill Clinton in the Oval Office in 1993. Her claims were largely discredited, and now widowed and divorced, she has dedicated her life to proving that Clinton is “a serial predator.”

She wrote a book: Target: Caught in The Crosshairs of Bill and Hillary Clinton, but aside from the occasional Fox News appearance, has found few venues willing to give her an airing and fewer employment prospects.

In 1994, Patrick Matrisciana produced a film called The Clinton Chronicles that was, according to its subtitle, “An Investigation Into The Alleged Criminal Activities Of Bill Clinton.” Over 500,000 copies found their way into circulation, but the distribution company that Matrisciana founded, Jeremiah Films, was since shut down (his son operates a rebooted version of it), and he has no plans to do another film on the Clintons.

If, as expected, Hillary Clinton runs for president, it remains to be seen how much the vast right-wing conspiracy will reconstitute itself.  Those who regret their role in the Clinton Wars think that it is a mistake to rehash Benghazi, never mind Vince Foster or Katherine Willey.

But those who think that Clinton was one of history’s great scoundrels are gearing up for a sequel. Even if they failed to much derail the first President Clinton, who is to say a further airing of the allegations won’t slow the potential second?


I'm sorry, but as much as I was not always a Clinton fan, these people are simply crazy and have never heard of the concept of letting go and moving on with life.  Sadly, it is a trait all too common among the spittle flecked base of today's Republican Party.
Posted by Michael-in-Norfolk at Thursday, May 22, 2014