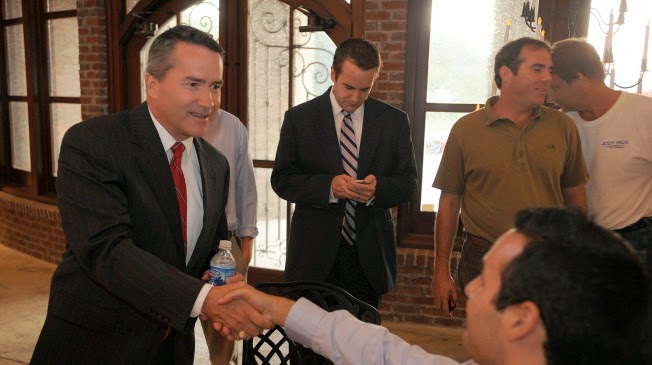 Hardly a day goes by when the somewhere in the GOP a striking demonstration is made of just who batshit crazy the party has become. GOP apologists try to depict such insanity as "exceptions" as opposed to the rule, but the frequency of such outbursts make it clear that the GOP has lurched off into crazy land.  The cause of such lunacy?  The rise of the Christofascists in the GOP.  The latest example of GOP batshitery comes from Georgia where Jody Hice, a pastor, talk radio host, and GOP runoff Congressional candidate has stated that the gay community had a secret plan to attract and sodomize children.The proof of this supposed plot?  None.  It's all in Hice's delusional, anti-gay animus filled mind.  Hice also believes that Muslims should have no first amendment rights.  The fact that Hice is a runoff candidate indicates that he is NOT some rogue exception.  Here are details from Talking Points Memo:

Jody Hice, pastor, talk radio host, and one of the Republicans in a runoff to replace Rep. Paul Broun (R-GA), argued that the gay community had a secret plan to attract and sodomize children.

That's according to Hice in his 2012 book "It's Now or Never: A Call To Reclaim America." The claim was highlighted by Mother Jones on Wednesday.

Hice managed to secure a runoff spot in the race for Broun's seat on Tuesday night. In July he'll face Michael Collins in the race.

He argues that Muslims shouldn't have first amendment rights and that people who support abortion rights are worse than Adolf Hitler. And Hice contends that being gay causes depression and shorter life spans.

There's more though. Hice, in his book, also calls local law enforcement in Elmira, New York "the Gestapo" after they arrested anti-gay demonstrators.

Sadly, Hice is the true face of today's Republican Party.  It is frightening.