Past Government Efforts to Drive Gays From Jobs 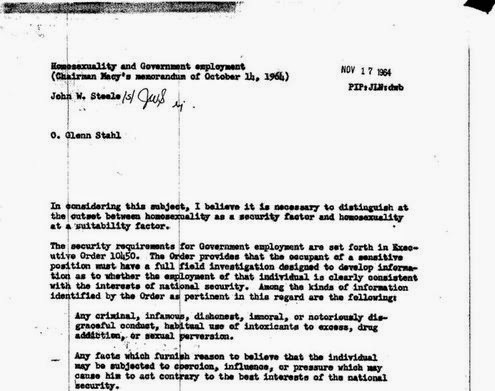 In their ridiculous brief in the Pennsylvania marriage case, defenders of state sponsored anti-gay discrimination made arguments that gays don't face discrimination and/or, that if they do, things are getting better,  Therefore, banning same sex marriage is fine. Obviously, the authors of the brief either were outright lying - a common Christofascist phenomenon - or their are trapped in the alternate fantasy world of the Christofascists to whom they are prostituting themselves.  Gays DO face ongoing discrimination, especially on the work front.  A piece in the New York Times looks at past government efforts to weed out and fire LGBT employees.  Behind it all, as always is ultimately hate filled religious belief akin to that which used the Bible to justify slavery and later segregation.   Here are some article highlights:

Days after President Lyndon B. Johnson’s election to his first full term, an administration official asked a subordinate to explain the policy on firing gays. In particular, he wondered whether someone with a history of gay liaisons could, through years of marriage, be “rehabilitated” into a trustworthy civil servant.


The response came quickly, and in language that would be shocking by today’s standards. Technically, rehabilitated gays could keep their jobs. But John W. Steele, a staff member of the Civil Service Commission, which handled personnel matters for the government, said that seldom happened.

“Some feel that ‘once a homo, always a homo,’ ” Mr. Steele wrote. He added, “Our tendency to ‘lean over backwards’ to rule against a homosexual is simply a manifestation of the revulsion which homosexuality inspires in the normal person.”

It was November 1964. Four months earlier, the president had signed the landmark Civil Rights Act banning discrimination on the basis of race, religion, sex and national origin. The policies laid out in Mr. Steele’s memo would continue for more than another decade.

[D]ocuments newly obtained by a gay-rights group offer new details about the views that drove the government’s sometimes obsessive effort to identify and fire gays in government jobs.

Memos like Mr. Steele’s, and formerly classified documents on an F.B.I. program called Sex Deviate, provide stark evidence of how for decades the government considered gay men and women to be immoral, and not to be trusted with even the most mundane bureaucratic tasks.

“These memorandums were not meant for the outside world to see,” said Charles Francis, a gay-rights advocate with the Mattachine Society of Washington. “It’s a tide of human indignation.”
For the past two years, Mr. Francis has been collecting documents on the government’s anti-gay policies, filling a gap that he sees in the archives of the gay-rights movement.

“There were two obsessions at the F.B.I. One was communism. The other was gays,” said Douglas M. Charles, a Pennsylvania State University professor who is writing a book on the F.B.I. and gays and who independently reviewed some of the same documents that Mr. Francis examined.

Under Mr. Hoover’s Sex Deviate program, the F.B.I. collected information on people suspected of being gay and passed it on to government agencies and, sometimes, the news media. The F.B.I. had a network of informants, including doctors, helping alert the authorities to what was seen as a growing national security threat, Dr. Charles said.

[T]he F.B.I. incinerated 330,000 pages of documents related to the program in 1977, leaving behind only a few scattered records. So efforts by people like Mr. Francis to make public the remaining documents, along with documents from elsewhere in government, are invaluable to historians and researchers, he said.

In 1975, in the face of lawsuits and protests, the government rescinded its policy that being gay, by itself, was enough to justify being fired. Today it is unlawful for the federal government to fire employees based on sexual orientation.

There is, however, no federal law prohibiting discrimination by private employers. Advocates have pushed for such a measure for years and repeatedly have called on President Obama to ban, by presidential decree, discrimination against gays who work for federal contractors.

Read the entire article.  It is  very sad that so many lives were damaged or ruined because of bigotry stemming ultimately from religious belief.   So many men and women were deprived of their dignity and their livelihoods - also that ultimately the "godly folk" could smugly feel superior and good about themselves.  Religion is truly evil in general and the evil done in religion's name far outweighs and positive outcomes.