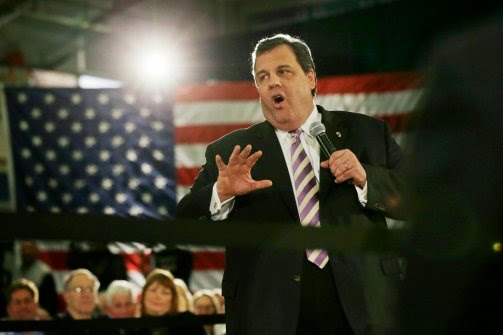 There had been speculation that New Jersey Governor Chris Christie might not reappoint New Jersey Supreme Court justice Stuart Rabner. Rabner who authored the Court's opinion striking down New Jersey's ban on same-sex marriage.  Some had believed that non-reappointment of Rabner would be Chrisite's way of satisfying Christofascists as he continues to jockey for position in the 2016 GOP presidential primary line up.  Yesterday, Christie put such fears to rest and announced that he is reappointing Rabner, no doubt to the dismay of GOP religious extremists across the country.  Here are highlights from a press release from Christie's office:

As all of you know, we have had a really vigorous and at times heated discussion about nominations to the Supreme Court over the course of the last four and a half years. And during that period of time we have traded opinions and traded disagreements and during that entire period of time though, one of the things that we don’t talk a lot about publicly but has been going on, on and off all during those four and a half years was an effort by myself and the Senate President to find common ground in places where we could and to reach compromise in places where we could.

[T]oday we find that common ground with Chief Justice Rabner and with Judge Solomon. In the end, I have expressed very clearly my disagreements with this court and I have expressed very clearly at times disagreements that I’ve had with individual opinions of the court and I’ll continue to do so. Because I believe I have a first amendment right to do it and I think I have an obligation to do it as Governor of New Jersey when I believe that my opinions need to be expressed to explain what public policy is all about and the impact the court has on public policy. That being said though, there was I don’t think a louder or stronger voice seven years ago for Stuart Rabner to become the Chief Justice of the New Jersey Supreme Court. And over the last seven years that I’ve watched him be the Chief Justice, my respect for him has never been diminished. I’ve disagreed with him and I’ve expressed that publicly. But never have I thought that he hasn’t run the courts in a fair, effective and efficient manner

[S]o while there’s been much speculation about all of this from people who don’t know anything about what I’m really thinking, I’m really pleased to be here today and to be placing his name and nomination for tenure as Chief Justice of the court. We have known each other for 13 years and I have come to respect him over that period of time and to also consider him a friend. And so I am happy that we’re able to move forward with his nomination and I urge the Senate to give him swift consideration and confirmation.

Can you hear Christofascist heads exploding??
Posted by Michael-in-Norfolk at Thursday, May 22, 2014