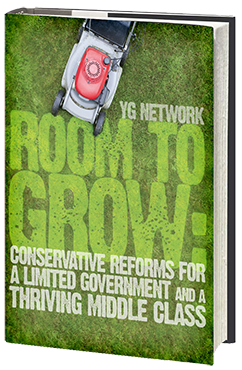 Given the reality that the GOP base - a base cynically cultivated and to which GOP elected officials continue to prostitute themselves to - is focused largely on Gog, guns, gay bashing, and restoring white supremacy as the law of the land, the small number of rational Republicans may find it difficult to sell a new manifesto that is aimed at attracting middle class voters.  For every vote they attract, they may lose votes amongst the knuckle dragging spittle flecked crowd that dominates the GOP grass roots.  They may even find themselves labeled as RINO's - Republicans in Name Only.  Undeterred, a group that calls itself the YG Network is releasing a book - a manifesto, if you will - of ideas aimed at changing the course of the GOP.  It would be nice if it worked, but I suspect these folks fail to grasp the reality that most of the GOP is now an insane asylum.  The New York Times looks at the effort.  Here are excerpts:

Hoping to push their agenda ahead of the presidential election, a group of prominent conservatives has devised a 121-page policy manifesto aimed at giving the Republican Party a message that will attract some of the middle-class voters the party lost in recent White House races.

The document, to be unveiled Thursday, features eight essays with proposals on issues including health care, taxes and education. The authors hope the book will help Republicans address the economic anxieties of Americans and nudge the party from its most polarizing positions and constant confrontations with President Obama.

“We have to do more than ‘Stand athwart history, yelling stop,’ ” said Pete Wehner, a conservative scholar, referring to William F. Buckley Jr.’s vision for National Review, the conservative magazine he founded.

A group of right-leaning writers and policy analysts, calling themselves “reform conservatives,” have been all but pleading with Republican leaders since the 2012 presidential election to move from the Reagan-era’s small government bromides and a mere opposition to liberalism to address voters’ everyday challenges.

But there has been little appetite for embracing such an expansive agenda among Republicans, many of whom see more benefits in their confrontations with Mr. Obama over issues like the attack on the United States Mission in Benghazi, Libya.

The Republican worries outlined in the manifesto are echoed in a new Democratic research project showing their House candidates faring better when Republicans are portrayed as not caring about working-class Americans in favor of the wealthy and corporations.

The new Republican ideas are being promoted by a conservative group, the YG Network

The set of proposals in the manifesto, titled “Room to Grow: Conservative Reforms for a Limited Government and a Thriving Middle Class,” address domestic matters exclusively; there is no mention of foreign policy or any discussion of immigration, a divisive issue within the Republican Party.

Instead, the authors lay out a set of ideas that they hope elected officials and candidates can make their own: replacing the new health law with tax credits for those who do not receive employer-based coverage; a tax overhaul that benefits middle-class parents; and changes to the student loan system.

These writers and scholars thought Mitt Romney was overly focused on entrepreneurship. Kate O’Beirne, who is an adviser to the YG Network, said the 2012 Republican convention “seemed like an N.F.I.B. convention,” a reference to the National Federation of Independent Business.

“News flash: Most people don’t own their own businesses,” she said.

The “reform conservatives” also hope to avoid a repeat of some of the 2012 debates.  “There was more talk in the Republican primary debates about electrified fences than higher education,” said Mr. Wehner, referring to discussions about border security. “We’re not going to win another presidential election if that is our approach.”

It would be nice to see the GOP return to sanity.  However, it may be a mission impossible situation given the extremism of the Christofascists/Tea Party.  The Frankenstein monster is going to prove to be very difficult to kill.

Email ThisBlogThis!Share to TwitterShare to FacebookShare to Pinterest
Labels: 2016 presidential elections, future of the GOP, God, God guns and gays, GOP Base, GOP extremism, GOP war on the middle class