The results of a new Gallup poll yields more bad for the Christofascists: support for same sex marriage has reached a new high with the under 30 generations supporting by a margin of 78% in favor and only 22% opposing.   The results should also send a chill down the spines of anti-gay Republicans who continue to a declining pool of angry, white, heterosexual conservative voters.  Meanwhile, only 31% of self-styled conservatives support marriage equality.  Here are highlights from a piece in The New Civil Rights Movement:

Support for same-sex marriage nationwide continues to shoot upward, and has reached an all-time high in Gallup’s latest poll. Gallup puts the number at 55 percent, with 42 percent of Americans opposed. That number is similar to a Washington Post poll earlier this year that found 59 percent support.

What’s staggering isn’t the number so much as the rapid change in opinion.

Gallup finds that overall, support for marriage equality jumped up two points since just last year, but among adults under 30, it jumped a staggering eight points — to a whopping 78 percent — since 2013. Moves like that are almost unheard-of.

Now, 74 percent of Democrats and 58 percent of Independents support the freedom to marry, while a meager 30 percent of Republicans do. Looking at ideology, 82 percent of Liberals, 63 percent of Moderates, and 31 percent of Conservatives support marriage equality.

Given the numbers, if the GOP was smart, it would simply give up its opposition and tell the Christofascists that the war is over. 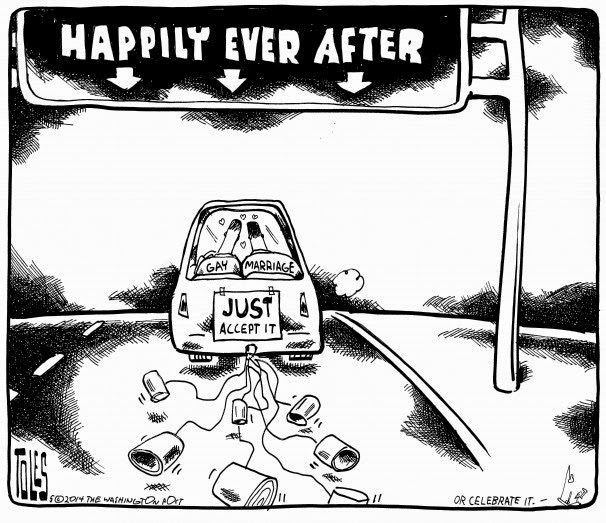