The Republican War on Workers’ Rights 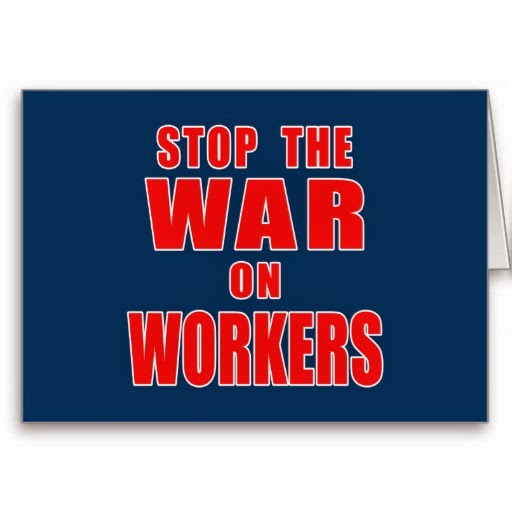 One of the hallmarks of the Gilded Age of the Vanderbilts, DuPonts, Astors, Rockefellers and others was that unions did not exist and workers rights were few and far between.   It is a situation that the Republican Party is striving hard to again replicate even as it seeks to destroy the social safety net that progressives built over the years.  It is one of the phenomenon that are fueling the growing wealth disparity in America and that have caused social mobility in the USA to now lag behind that of Europe and Canada.  Sadly, too many Americans aren't paying attention and they do so to their own detriment.  A column in the New York Times looks at the GOP's insidious war against workers.  Here are excerpts:

Midterm elections are like fancy software: Experts love them, end-users couldn’t care less. But if the 2010 elections are any indication, we might not want to doze off as we head into the summer months before November. Midterm elections at the state level can have tremendous consequences, especially for low-wage workers. What you don’t know can hurt you — or them.

In 2010, the Republicans won control of the executive and legislative branches in 11 states (there are now more than 20 such states). Inspired by business groups like the American Legislative Exchange Council (ALEC), the U.S. Chamber of Commerce and the National Association of Manufacturers, they proceeded to rewrite the rules of work, passing legislation designed to enhance the position of employers at the expense of employees.

The University of Oregon political scientist Gordon Lafer, who wrote an eye-opening report on this topic last October for the Economic Policy Institute, a liberal think tank in Washington, looked at dozens of bills affecting workers. The legislation involved unemployment insurance, the minimum wage, child labor, collective bargaining, sick days, even meal breaks. Despite frequent Republican claims to be defending local customs and individual liberty, Mr. Lafer found a “cookie-cutter” pattern to their legislation. Not only did it consistently favor employers over workers, it also tilted toward big government over local government. And it often abridged the economic rights of individuals.

Republican state legislators have devised a way around that. In 2011, lawmakers in Wyoming introduced a bill that would have allowed restaurants and other employers to force their serving staff to pool their tips; tips would be redistributed among the nonserving staff, who could then be paid the subminimum wage.

[C]onservative Republicans supported the right of employers to take money that workers had earned. This disregard for the earnings of workers is only an extreme manifestation of a more common phenomenon among Republican legislators: their indifference to the problem of wage theft. Wage theft refers to the practice among employers of taking money from their employees by illegally paying them less than the minimum wage or not paying them overtime.

One of the causes of this epidemic of wage theft . . . . . is lax enforcement of the country’s wage and hour laws. In 1941, there was one federal inspector for every 11,000 workers. As of 2008, there was one for every 141,000 workers. “The average employer has just a 0.001 percent chance of being investigated in a given year,” Mr. Lafer estimates. Because there is so little risk of getting caught, one-third of all employers who have been found guilty of violating wage and hour laws continue to do it.

Over the last four decades, for example, low-wage workers have been hit hard by the declining value of the federal minimum wage. In the absence of federal action, states, cities and counties have increased the minimum wage or indexed it to inflation (or both) to ensure that it keep pace with rising costs.

Republican politicians in state capitals have tried to check them at every point. Florida, Indiana and Mississippi have banned local governments from increasing the minimum wage. In Nevada, Missouri and Arizona, state legislators tried to overturn constitutional amendments and ballot initiatives. In 2011, New Hampshire’s Republican legislature simply abolished the state’s minimum wage.

The overall thrust of this state legislation is to create workers who are docile and employers who are empowered. That may be why Republican legislators in Idaho, Wisconsin, Michigan, Maine, Ohio, Minnesota, Utah and Missouri have been so eager to ease restrictions on when and how much children can work.

What might Adam Smith, often claimed as the intellectual godfather of the American right, have said about these legislative efforts? “Whenever the legislature attempts to regulate the differences between masters and their workmen,” wrote Smith in “The Wealth of Nations,” “its counsellors are always the masters. When the regulation, therefore, is in favour of the workmen, it is always just and equitable; but it is sometimes otherwise when in favour of the masters.”

Republicans may claim to care about working families but in truth, they do not give a damn.  The working population needs to quickly wake up to this reality.
Posted by Michael-in-Norfolk at Monday, May 19, 2014