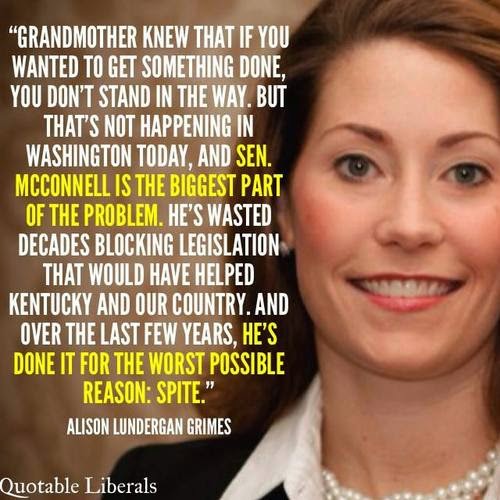 Having just triumphed over a thoroughly insane Tea Party candidate, the always sleazy and despicable Mitch McConnell launched into a tirade trashing his Democrat opponent, Alison Grimes.  The unanswered question is whether or not McConnell's chauvinistic, condescending attacks on his female opponent will ultimately bite him in has nasty, foul ass.  Personally, I hope that's the post mortem opinion after November.  A column in the Washington Post looks at what will likely be a very ugly campaign.  Here are some highlights:

McConnell laconically invited a round of applause for Bevin and then moved to his main purpose: treating Alison Lundergan Grimes, his Democratic opponent, not as a person in her own right but rather as an agent for President Obama and Senate Majority Leader Harry Reid.

First elected to the Senate three decades ago, McConnell clearly realizes he cannot win on the basis of his own low poll ratings. So he’ll try to survive by running against Democratic politicians who, in this red state, may be even more unpopular.

Thus his reduction of the 35-year-old Grimes to a cipher, the handmaiden to “every Hollywood liberal,” someone who “is in this race because Barack Obama and Harry Reid want her to be in this race.”

But when Grimes spoke at her own primary victory party 75 miles away in Lexington, she was anything but a cipher. She was rousing in assailing McConnell but did not rise up in defense of either Obama or Reid. Indeed, she distanced herself from what she, sounding a McConnell theme, termed the president’s “war on coal,” coal being an issue with symbolic power here beyond its economic impact on the state’s mining counties.

Obama is not on “Kentucky’s 2014 election ballot,” she declared. But McConnell is, and the best way for Kentucky voters to express their dissatisfaction, she said, was to vote out “Senator Gridlock” and to put “people above partisanship.” For good measure, she broached populist pro-labor themes, challenging McConnell for opposing a minimum wage increase and a bill on equal pay for women. She also denounced anti-union right-to-work laws being pushed here by Republicans.

Pro-McConnell forces blanketed the state with an attack spot that reprised his election-night themes and condemned Grimes as “too liberal for Kentucky.”

Grimes went for a more subtle jibe, with a 60-second spot in which she spoke directly to the camera. “It seems no matter how many elections we have, nothing gets better in Washington. It only gets worse,” she said. “I approved this message because it’s time Washington put the good of our people ahead of the bad that comes from acting petty and small. We’ve had too much of that for too long.”

Few thinks would give me more pleasure than to see McConnell defeated - especially by a woman.