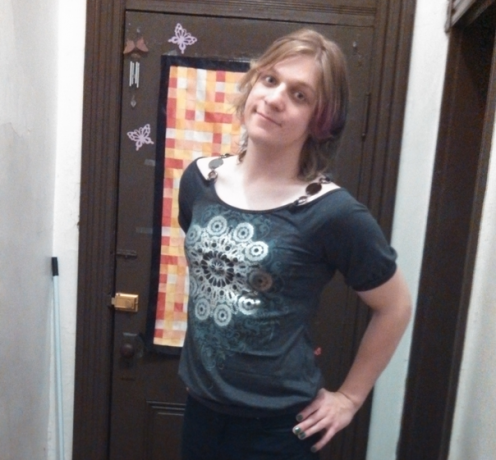 Currently, the ONLY protections LGBT Virginians have under Virginia law appear in the Virginia Canons of Judicial Conduct which among other things in Canon 3 require judges who cannot remain unbiased and objective based on a litigants sexual orientation to recuse themselves.  In plain English, this means that they must not hear the case and defer the case to a different judge.  Sadly, far too many Virginia judges ignore the Canons and the enforcement of the Canons is to say the least almost nonexistent.  In my divorce, the judge was a far right Catholic who viewed being gay as a "choice" and sought to punish me accordingly.  Now, a Lynchburg, Virginia judge (who was formerly legal counsel at the late Jerry Falwell's lunatic Liberty University and a legislative aid to one of the authors of Virginia's anti-gay marriage ban) has reversed himself and decided to grant a name change to a transwoman (pictured above) after previously denying the petition.  Whether the judge's change of course was due to negative media coverage or a realization that he might face consequences we will never know.  Gay RVA has details.  Here are highlights:

In a reversal of his original decision, Lynchburg judge F. Patrick Yeatts has granted transwoman Julianna Fialkowski a name change.

Lawyer Kate Fletcher received the information late this afternoon via fax. She suggested it was the brief she filed, combined with the press around the issue, which led the judge to rule based on the statute which is what they had asked for all along.

“Julianna has complied with the statute and wasn’t requesting the name change for fraudulent purpose, nor to infringe on anyones rights,” said Fletcher. “There for he is granting the request.”

She has a message for other who fear they might have to go through a similar experience when they seek a name change. “I don’t think holding back on account of being afraid for yourself is necessary;” Fialkowski said. “If enough support is sought after, it will be found.”

She told GayRVA earlier this week  Judge Yeatts said her the case was under “extra scrutiny” and it would be put under advisement after asking her medically specific questions pertaining to her transition, something not relevant to a name change request.

This line of questioning lead Fialkowski to believe she was being unfairly discriminated against.  Even in traditionally conservative Lynchburg, Fialkowski said she hadn’t ”faced any discrimination up until this point.”

Yeatts served as counsel to Jerry Falwell’s conservative Liberty University in the 90′s, and he was a legislative aide for state Sen. Stephen Newman when the Senator wrote VA’s constitutional ban on same-sex marriage, the Marshall-Newman amendment. He was elected to the Lynchburg Judgeship in 2011 by the state’s General Assembly.

Virginia’s name change laws are some of the easiest in the nation. The process consists of a few forms and a small fee. When GayRVA reached out for legal advice for those denied a name change, lawyers were surprised to hear it even happens.

“There is nothing in the statute that requires the applicant provide medical information. The application merely requires some demographic information (e.g. name, address, parent’s names, prior name changes etc.) and whether or not you are a felon or are incarcerated. The statute indicates that the name change will be granted unless the name change is being done for a fraudulent purpose or infringes upon someone else’s rights,” said Fletcher earlier this week.

But Fletcher wasn’t sure this would be the last time such a case of discrimination would pop up again in rural Virginia.  “I think it might happen again, but I think if it goes to a hearing we would be successful,” said Fletcher.

Unfortunately, under Virginia's judicial appointment system, partisanship and adherence to party platform mean more than one's likely competence  on the bench.  Given the GOP strangle hold on the House of Delegates, religious extremism definitely counts more than legal competence.  Yeatts is far from the only bigoted judge pushed through by Virginia Republicans.
Posted by Michael-in-Norfolk at Thursday, May 22, 2014