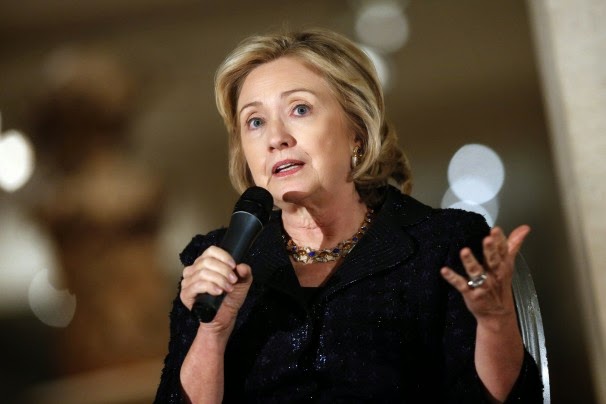 For all the talk that Hillary Clinton may be invincible in 2016, the woman does have baggage.  Plus she has Bill who can be both a secret weapon and a gun held to one's own head.  The their is the visceral hatred that some on the far right hold for Hillary, probably in part because they view here as an uppity woman who doesn't know her place.  Can't you hear the Southern Baptist Convention's Richard Land decrying Hillary's failure to be submissive?  A column in the New York Times looks at the obstacles that Hillary may face if, indeed, she makes a play for the White House in 2016.  Here are highlights:

Reince Priebus made a joke on Sunday.  I don’t know that he meant to — comedy isn’t his forte — but the only way to hear one of his comments on “Meet the Press” was as a put-on. He said that Hillary Clinton wouldn’t run for the presidency if “she has another month like she just had,” with questions about Monica, about Benghazi, about Boko Haram, about her brain.

I almost fell down. For one thing, she’s had countless months like that. For another, they’re the only kind on the horizon: Hillary as the fodder for the morning talk shows (on Sunday’s panels, she came up 98 times, according to a Washington Post tally) and Hillary as a piñata for late-night comedians; strenuously marketed Hillary scandals with a modicum of merit and strenuously marketed Hillary scandals with none.

If Republicans believed in global warming, they’d surely divine her hand in it.

With all politicians, you worry about the intensity of the hunger that enables them to suffer the snows of Iowa and the slings and arrows of outrageous pundits. With Hillary and Bill, you worry that it’s rapaciousness beyond bounds.

You also grow weary. The Clintons are exhausting. And that’s just one of many drawbacks worth discussing as Hillary plays Hamlet, mulling what to do.

She’s without doubt the contender to bet on. But she’s a contender with baggage and obstacles that get woefully short shrift in all the nonstop chatter about her inevitability.

For starters, Americans have been in a pessimistic mood for an unusually sustained period, their faith in the political system at rock bottom. How does someone who’s been front and center in that system for more than two decades — who’s a symbol of intense partisan warfare — become the voice of change?

He [Bill Clinton] was also serving notice that despite his screw-ups during Hillary’s 2008 campaign, it may be impossible to muzzle him in 2016. Just last week, on yet another stage, he again joined the fray, proclaiming Hillary blameless for Benghazi and vouching that her concussion was merely that. There’s a thin line between chivalry and butting in. Can he stay on the right side of it? If not, he could hurt her candidacy, overshadowing her and undercutting her feminist story line.


She has additional challenges. If Obama’s approval rating doesn’t rise, his would-be successors will be best served by breaking with him. For Hillary that’s hard. Given her history on health insurance, she can’t run against the Affordable Care Act. Given her role in his administration, she can’t run against his foreign policy.  How does she simultaneously defend and defy him? It’s a balancing act that Al Gore never perfected in regard to her husband.

The last month has indeed been instructive, demonstrating how practiced Republicans are at attacking her — and how exuberant they are about it. I think they want her to run. She’s the devil they know. She’s the dragon worth slaying.

Maybe any sense of staleness will be expunged by the prospect of a first female president, but she lacks an opportunity that many successful presidential candidates enjoyed: that period of the rollout when a more detailed biography emerges, a personality is defined and voters get a chance to swoon.

We can’t fall in love that way with Hillary, not at this point. We’re too far past the roses and Champagne.

Hillary certainly has her issues, but compared to the possible GOP opponents, she still looks better.
Posted by Michael-in-Norfolk at Tuesday, May 20, 2014