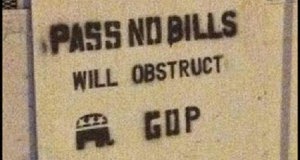 Outside the knuckle dragging, drooling, spittle flecked circles of the Republican Party of Virginia base, sentient Virginians want Medicaid expansions.  Supporters of expansion range from the state's chambers of commerce, to hospital associations, charities that work with the uninsured, to those who - unlike the Pharisee like Christofascists - believe the Gospel message mandates caring for the sick and less fortunate.  Yet hatred for America's first black president trumps all else with the Virginia GOP.  Even as other GOP controlled states are shifting towards Medicaid expansion.  A column in the Washington Post looks at the Virginia GOP's increasingly lonely position which harms hundreds of thousands of Virginians and puts many hospital systems at financial risk.  Here are excerpts:

REPUBLICANS IN Virginia’s House of Delegates have blocked hundreds of thousands of poor Virginians from getting health insurance under the Obama administration’s Medicaid expansion. At the same time, they’ve refused to suggest any alternative method by which the needy people in the state might arrange health coverage.

Meanwhile, the list of Republican governors around the country who want new federal Medicaid funds — and the huge benefits they bring for their states — continues to grow. Richmond’s just-say-no crowd, led by House Speaker William J. Howell (R-Stafford), looks increasingly isolated and callous.

The latest to opt into the Medicaid expansion, albeit on terms the federal government must first review, is Gov. Mike Pence, the Republican governor of a very Republican state: Indiana.

Other GOP governors, alert to the acute need to provide coverage for millions of people who need it, have either embraced the expansion outright or pitched creative ideas to the Obama administration in the hope of drawing on the new federal funds.

Gov. Tom Corbett of Pennsylvania has negotiated with federal officials on allowing his state to use the new Medicaid funds to purchase private health insurance for low-income people. That’s similar to a plan being carried out by Arkansas, where Republicans who control the legislature were divided but ultimately accepted a private option in the belief that the for-profit marketplace would administer the federal benefits more efficiently than Medicaid would.

Lawmakers in Virginia’s Senate adopted a similar approach, passing a bill sponsored by a Republican, Sen. John C. Watkins (Powhatan), that would extend health coverage to several hundred thousand indigent Virginians. Gov. Terry McAuliffe (D) said he was amenable to the plan. But Republicans in the House of Delegates, led by Mr. Howell, said no.

We wish Ms. Brewer, the Arizona governor, would come to Virginia for a little sit-down with Mr. Howell. Ms. Brewer is no one’s idea of a patsy for Mr. Obama: She once delivered a finger-wagging lecture to the president’s face. But even after denouncing Obamacare, she could not defend refusing millions of federal Medicaid dollars — dollars that her constituents have paid in taxes — that would help some of the neediest people in her state.

“[T]here comes a time [when] you have to look at the reality,” she told Politico last year. “You have to do the math. . . . It’s not only a mathematical issue, but it’s a moral issue.”

As seemingly is more and more the case, the Republicans offer no solutions and simply say "No."  And in the process they show the utter hypocrisy of their claims  that they value "Christian values."  They and their party's base are increasingly foul and make the Pharisees of the Bible appear to be upright, moral individuals.  The sooner conservative Christianity becomes a dead religion, the better off America will be.