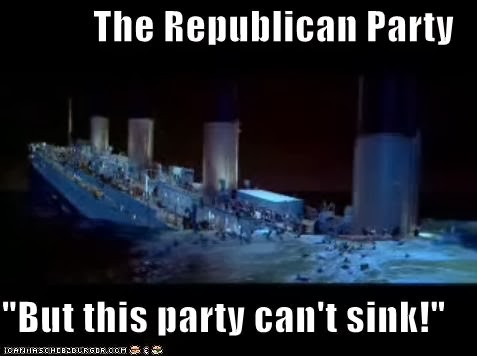 With the Republican Party base - i.e., angry white conservatives - aging and dying off only to be replaced by more liberal and more racially diverse citizens, the GOP needs to face the reality that either it changes or else in the not too distant future it will become a permanent minority party.  Here in Virginia (outside of gerrymandered House of Delegate districts in particular) the demographics are approaching a permanent tipping point.  Texas is following  a similar arch toward a GOP hostile future.  As a column by Michael Gerson, a conservative, in the Washington Post, immigration reform is forcing an existential question on the GOP whether it wants to face the coming reality before it.  Here are column highlights:

The Republican Party faces an existential question: Can it make the transition to a more welcoming position on immigration without tearing itself apart or further alienating Latinos by the tenor of its internal debate? The journey is necessary, perilous and always easier to delay than begin.

Most Republicans — or at least the subset that cares about the national fortunes of the party — recognize that Mitt Romney’s 27 percent showing among Latino voters was a frightening portent. While not even the worst of Romney’s electoral problems — a lack of enthusiasm among white, working-class voters probably takes that honor — this outcome represents collapsing support in a rising group.

There are a variety of ways to do the electoral math, but here is one: Republicans won about a quarter of the Latino vote in a nation when about a quarter of all children entering kindergarten are Latino. Republicans have a rendezvous with irrelevance, arriving faster in places such as Colorado, Nevada and Florida. While it remains possible for Republicans to win national elections with low Latino support, it will become harder and harder over time. Eventually, a party at war with demography becomes accustomed to defeat.

Confronting the problem seems even less attractive because it won’t be solved in a single, symbolic vote on immigration reform. That would only allow a more extensive courtship to begin. And
Republican leaders in the House have taken their first, hesitant steps by issuing a set of immigration reform principles. . . . . Improved enforcement first, then legal status for undocumented workers meeting stringent conditions — pay a fine, know English, no welfare benefits. Children brought to America by undocumented parents would gain citizenship. Others — and here the document is a bit fuzzy — would have to go to the end of the current citizenship line.

An element of the conservative movement has delivered its usual, considered response. “We ought not be granting citizenship to people that don’t love the country,” says Rush Limbaugh. “It’s the end of the Republican Party. It’s the end of the country as we know it.” It is so easy for ideology to drain politics of humanity — to turn human beings into categories and categories into threats.

There are, however, more serious criticisms about House Speaker John Boehner’s timing, even among those open to reform. Immigration reform is an issue that generally unites Democrats and deeply divides Republicans. Why emphasize those divisions . . . .

There are valid questions about the timing of the inevitable Republican transition on immigration reform. But it is a good and healthy thing that the argument among House Republicans is increasingly about timing rather than destination. Boehner’s initiative is simply an honest recognition of the difficult, inevitable Republican journey that lies ahead.

Expect serious push back from the Christofascist/Tea Party base of the GOP to any meaningful reform.  To this element of the GOP, if one isn't white, conservative Protestant and straight, one isn't really even fully human.