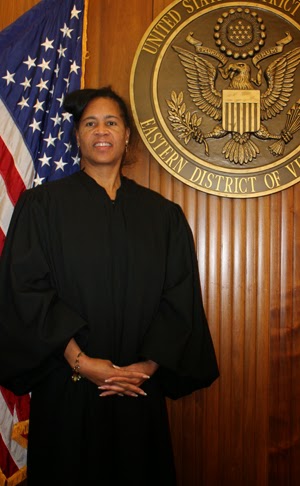 As seems to be frequently the case, when a judge has a high profile case land in their court, suddenly attention becomes focused on the judge.  Most federal judges keep pretty low profiles - two of my former law partners are federal judges -  and try to avoid the spot light.  Presiding over the case Bostic v. Rainey pending in the U. S. District Court for the Eastern District of Virginia has certainly thrown Judge Arenda Wright Allen fully into the spotlight.  Ironically, a financial adviser I met with yesterday happens to go to church with her.  A piece in the Washington Post looks at Judge Wright Allen's somewhat unique career path.  She is the first black woman to serve as a federal judge in Virginia.   Here are some article highlights:

The judge deciding what could become a landmark gay marriage case in Virginia defies easy characterization: She was a prosecutor, but also a public defender. She was appointed by President Barack Obama, and she also served in the military as a Navy lawyer.

U.S. District Judge Arenda L. Wright Allen, who has been on the bench for less than three years, is overseeing the highest-profile case of her short judicial career. If she throws out Virginia’s ban on same-sex marriage, the state would be the first in the South to allow gay marriage, though attorneys on both sides say her ruling will be appealed.

Liberals who want the state’s ban overturned may be encouraged by her service as a public defender and the fact that she is an Obama appointee, while conservatives may be heartened by her experience as a no-nonsense federal prosecutor.

“It’s very hard to have a sense of her on this kind of issue,” said Carl Tobias, a law professor at the University of Richmond who closely watches federal courts in Virginia.

He said it’s difficult to read anything into Wright Allen’s judicial philosophy based on her record because she has not had any cases that come close to matching this one, and she rarely deals with cases so purely focused on constitutional interpretation.

At Tuesday’s same-sex marriage hearing, Wright Allen listened intently as opponents of the ban argued it was just like segregation and the Jim Crow-era prohibition against interracial marriage. Supporters maintained there was no fundamental right to gay marriage and the ban exists as part of the state’s interest in responsible procreation. Wright Allen didn’t ask the attorneys any questions, promising only to rule soon.

Two weeks before the hearing, Virginia’s new Democratic Attorney General Mark Herring announced that his office would not defend the state against lawsuits challenging the ban. Wright Allen said in court documents she considered not even hearing verbal arguments because of the “compelling” filing by the attorney general’s office.

Wright Allen, 53, took the bench in October 2011 following a unanimous Senate confirmation, becoming the first black woman to serve on the federal bench in Virginia. She graduated from Kutztown University in Pennsylvania in 1982 and received her law degree from North Carolina Central University School of Law in 1985. She then went on to serve as a judge advocate officer in the Navy before becoming an assistant U.S. attorney in Norfolk in 1990.

FBI chief of staff Chuck Rosenberg, who served alongside Wright Allen as a prosecutor in Norfolk in the 1990s, called Wright Allen “about the nicest person you could meet” and said she was thoughtful and open-minded.  “She brings a lot of experience from a lot of different places to a very important job,” Rosenberg said.

Note, she was unanimously confirmed by the U.S. Senate.  Want to bet the Republicans demonize her as a "liberal activist judge" if she strikes down the Marshall-Newman Amendment?