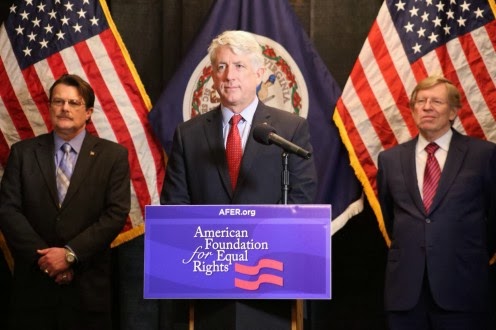 My busy schedule at the law office kept me from doing an earlier update following today's hearing in Bostic v. Herring, although I did get to speak with Brad Kutner of GayRVA who borrowed my conference room to finish his pieces for that publication.  The reports I have heard seem positive, including the comment that Judge Wright Allen had to ask the attorney from Alliance Defending Freedom (a deceptively named Christofascist organization) arguing on behalf of Prince William County Circuit Court Clerk, Michele McQuigg to stop yelling as he delivered his argument.  Both GayRVA and Metro Weekly have good accounts of the events at today's hearing and the press conference that followed.  First these highlights concerning the post from GayRVA:

Following the landmark hearing held this morning, Attorney General Mark Herring and the plaintiff team gathered together for a post hearing press conference near the Norfolk District Court.

“Today was a significant day in the journey for equality for all Virginians,” said Herring. “I am proud to say today that Virginia stood on the right side of the law, and the right side of history when it comes to this discriminatory ban.”

Herring’s choice to not defend the state’s ban comes from a combination of loose campaign promises and his office’s internal review of the constitutionality of the law. He’s since come under fire from House Republicans for taking this position, some have asked for his resignation over the issue.

But Herring continued to defend his choice. “…Despite claims to the contrary, my action in this case has not ended the marriage ban, nor has it (ended) the court case, nor does it mean the marriage ban is being decided in court. This case is fundamentally about whether Virginia can fundamentally treat same-sex couples as second class citizens, or whether the US Constitution truly guarantees equality under the law.”

At the root of the criticisms being throw at Herring is the refusal by his critics - mostly whom are Ken Cuccinelli style GOP extremists and Christofascist organizations - is a refusal to concede that (i) the United States Constitution ALWAYS overrides the Virginia Constitution to the extent that the latter is in violation of the former, and (ii) the will of a bigoted and/or animus filled majority NEVER overrides the constitutional rights of a minority.  And given Virginia's horrific history of civil rights violations there is ample evidence that the beliefs of the majority of Virginians should never be allowed to again deprive any minority of their civil legal rights as U.S. citizens.

As for events during the hearing itself, her are excerpts from MetroWeekly:

U.S. District Court Judge Arenda L. Wright Allen today told parties in the case of Bostic v. Rainey, which is challenging Virginia's constitutional amendment banning recognition of marriage and any other form of relationship or contract between same-sex couples, that she will issue a ruling "soon," after hearing arguments in the case in U.S. District Court for the Eastern District of Virginia, in Norfolk, this morning.

Assisted by the American Foundation for Equal Rights (AFER), the plaintiffs' attorneys, including the legal duo of Ted Olson and David Boies who successfully argued in favor of overturning California's Proposition 8 before the U.S. Supreme Court last year, have argued that Virginia's ban deprives their plaintiffs of the fundamental right of marriage and discriminates against them on the basis of sexual orientation, denying them equal protection under the law as guaranteed by the 14th Amendment of the U.S. Constitution.

According to those present in the courtroom, Allen took copious notes and asked few questions as she listened to arguments. Olson, in a conference call following the hearing, said he had heard "nothing new" in the arguments put forth by those maintaining that the ban should stay in place, saying he had not heard "any convincing or rational argument" for denying same-sex couples the right to marry.

"We went through the evidence that we’ve presented to the court, that demonstrated that gay and lesbian citizens who are deprived of the right to marry in Virginia are seriously harmed, and that harm extends to the children they're raising," Boies said during the call. "We demonstrated that there's no advantage to anyone, no advantage to heterosexual marriage, no legitimate state interest in continuing this harm, and we asked the court to end this discrimination. Just as the United States Supreme Court, in 1967, ended Virginia's ban on interracial marriage, we asked this court today to end the Virginia ban on same-sex marriage so that gay and lesbian citizens, like every other citizen, will be able to marry the person they love and raise children in a stable environment."

Tuesday's hearing also featured Virginia Solicitor General Stuart Raphael, who argued the new position of the commonwealth as determined by Attorney General Mark Herring (D), who has found that the ban is unconstitutional and announced last month that his office will not defend it in court.

"I'm proud to say that today the commonwealth of Virginia stood on the right side of the law and the right side of history, in opposing this discriminatory ban," Herring said during the call. "This case is fundamentally about whether Virginia can treat same-sex couples as second-class citizens, or whether the U.S. Constitution clearly guarantees equality under the law. It is also more than an abstract legal debate. The debate affects the lives of thousands of Virginians who are our friends, our neighbors, co-workers, parishioners at church, our brothers and sisters, and they deserve to be treated exactly the same as all other Virginians."

Herring characterized this morning's court date as a "significant day" for the commonwealth, saying the state "got it right" in its arguments against the ban, contrasting its new position with previous positions that sought to enforce discrimination in schooling, in interracial marriage, and based on gender in cases such as Brown v. Board of Education (1954), Loving v. Virginia (1967), and United States v. Virginia (1996), while vowing that the same type of injustice "will not be repeated this time."

A spokesperson for Alliance Defending Freedom, one of the groups assisting the defendants in arguing the ban to be maintained, was not immediately available for comment.

As GayRVA reported, the defense mounted by the defendants was basically the same old tired tripe that we have heard put forth by the Christofascists in every marriage equality case to date:

The defense, county clerks from Norfolk and Prince William County, had individual legal council. The arguments supporting the ban stemmed from procedural concerns. Both the 2006 vote which gave Virginians the chance to support the issue and the continued failure of the General Assembly to remove the ban legislatively suggested the law should stay in place, argued the defense.

Additionally, the defense argued marriage is an ancient union steeped in tradition. Lawyers for the Alliance Defending Freedom stressed this point saying “Marriage has always been between a man and a woman throughout history… the only fundamental right to marriage is for traditional couples.”  ADF lawyers also cited the gay and lesbian agenda, saying LGBTQ individuals are not a persecuted class, and the presence of the AG helping their cause suggests a conspiracy against straight people.

In response to this batshitery, I would note that slavery an ancient tradition but that did not make it right.  As for the facical claim that "marriage has always been a man and a woman throughout history," the Bible beaters ought to go back to reading their Bibles so that they would realize that polygamy, not monogamy was the Old testament standard for marriage.