I will admit that aside from skiing (on snow and water), sailing, and surfing, I did not get the sports gene.  Neither did the boyfriend.  Nonetheless, we will be attending a friend's annual Super Bowl party in Virginia Beach where there will be a plethora of gays some of whom will be actually paying attention to the game.  Since I don't follow pro-sports teams, I will be supporting the Sea Hawks based on the fact that my son (who doesn't follow sports either) and daughter and son-in-law live in Washington State whereas I have no connection at all with Denver.  Given that I will be at a Super Bowl party, a column in Out Sports gives some facts on tonight's game for the non-sports follower.  Here are highlights:

This is my 13th installment of how I see the Super Bowl, along with the important and fun angles.

A friend of mine says it perpetuates stereotypes that gay men only like the Academy Awards, reality TV or fashion, but the conceit has always been that it's a knowledgeable gay football fan hoping readers, gay or straight, will learn something new to toss out at a Super Bowl party.

WHERE: The game is being played at MetLife Stadium in East Rutherford, N.J., though technically the host city is New York. Both teams are staying in Jersey City, so don't expect a lot of late nights in Manhattan for the players. Rest assured, no A-list parties will be held in Jersey City.

WEATHER: The big news about the location is that it's the first time a game is being played in a cold weather climate in a non-covered stadium. The forecast for game time (6:30 p.m. local) is for the temperature in the mid-20s with a chance of snow showers, which would make it the coldest Super Bowl game ever. I think it's a terrible idea to hold the game outdoors in a cold climate, since weather should not be a determining factor once the conference playoffs are over. But hosting a Super Bowl was an inducement the NFL offered the New York Jets and Giants for building MetLife Stadium.

KICKOFF/TV: The kickoff is set for 6:30 p.m. EST, shortly after opera soprano Renee Fleming sings the National Anthem. She is the first opera singer to perform the song at the Super Bowl. Friend of Outsports and my source for all things opera, Jim Allen, has this to say about Fleming:  "She's marketed in the opera world as a sophisticated but unpretentious, non-Diva singer who just happens to be one of the most popular opera singers in the world.

FASHION NOTE: Denver is the home team and will wear orange jerseys with white pants. The Seahawks will wear their white away jerseys with navy pants with a neon green stripe. It will be a good contrast on TV.

SHIRTLESS FASHION NOTE: Denver wide receiver Eric Decker and his wife, country singer Jessie James, have a reality show on E! They also did a photo spread for GQ magazine they featured a lot of him shirtless, which garnered zero complaints from our readers: 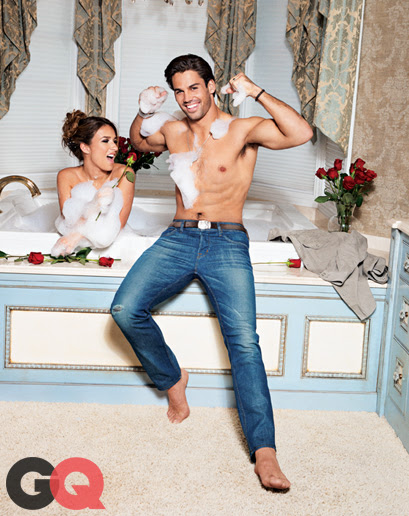 THE GAY ANGLE: Unlike past recent Super Bowls, there is not much of a gay angle here, with few cases of players saying anything pro or con about gay issues. Seattle punter Jon Ryan was very vocal last Super Bowl when San Franciso 49ers player Chris Culliver made anti-gay remarks; Ryan said Culliver needed to be suspended. In contrast, Seattle lineman Chris Clemons, responding to Jason Collins coming out in the NBA, said a player coming out openly would be a "selfish act."

As for Denver, . . . Broncos defensive back Dominique Rodgers-Cromartie said "it would be hard" for some players to accept a gay player.

ENTERTAINMENT: Bruno Mars, backed up by the Red Hot Chili Peppers, will be the halftime entertainment. Since I can't name one song Mars has done and have never liked the Peppers music, I don't have much to say and will use halftime for a food break. The only question will be whether Flea gets shirtless in 20-degree temperatures.

THE COMMERCIALS: You can preview Super Bowl commercials on a zillion sites and they usually bore me, but one I will watch will be David Beckham for H&M underwear:  "In the spot, David is accidentally locked out of a photo shoot on a rooftop wearing only his underwear. With no way down, he goes to great lengths to find a way back inside, performing all his own stunts in the process.  Fans will see Beckham zipline across rooftops, scale buildings and navigate tricky obstacles all in his signature briefs. The commercial culminates in one of two unexpected ways – with David either "#Covered" or "#Uncovered."

THE PICK: Before the season I took Denver over Seattle in the Super Bowl and I see no need to change it. Manning will make enough plays and Welker in the slot catching passes will be the X factor. Denver's defense will do just enough to hold down Wilson and the Seahawks. Broncos 23, Seahawks 20.