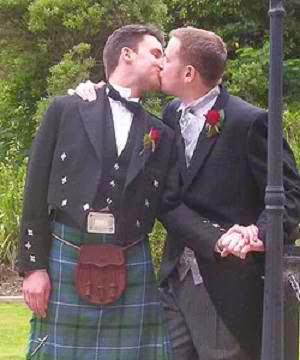 While the Virginia GOP continues to pander to religious extremists and the forces of ignorance and reaction, the Scottish Parliament has enacted a gay marriage bill that will bring same sex marriage   The main opponents of the measure were - as is always the case - religious groups (principally, the Catholic Church and Church of Scotland) that sought to force their religious beliefs on all of Scotland.  Thankfully, the measure passed by a landslide vote.  Weddings will begin on March 29, 2014. Here are highlights from MetroWeekly:

Same-sex couples are celebrating in Scotland as the Scottish Parliament has passed the Marriage and Civil Partnership (Scotland) Bill, which legalizes same-sex weddings in the country. It was a landslide victory for the bill, which passed with 105 votes in favor and just 18 against. Ministers of the Scottish Parliament (MSPs), who were granted a free vote outwith party lines, further rejected amendments which aimed to include protection for those groups or individuals opposed to same-sex marriage.

Mr Neil called the passing of the bill "a historic day in the history of the Scottish Parliament", while gay rights organizations have similarly lauded its success, including the Equality Network and Stonewall Scotland. Several religious groups have also championed the legislation, with Quakers stating they will allow ceremonies to take place on their premises, while Buddhists and the Pagan Federation have also shown support.