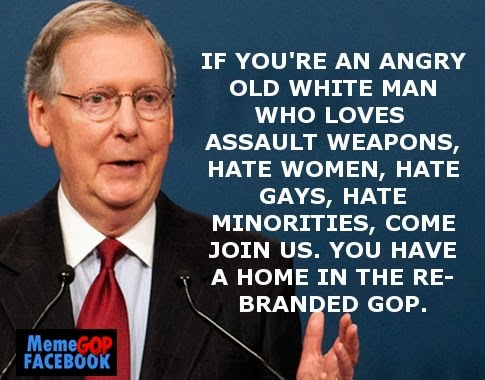 As previously noted, the GOP leadership in the U.S. House of Representatives has floated some supposed principles for immigration reform.  Like most GOP ideas nowadays, the principles have many serious defects, not the least of which is that it would create a permanent non-citizen underclass.  A column in the New York Times looks at other problems with the GOP principles as well as the continued civil war that any sort of so called amnesty would fan with the ever more white supremacist GOP base which views any member of a non-white racial minority as undeserving of citizenship and as not "real Americans."  Here are column excerpts:

Again, you have establishment Republicans transparently eager to cut a deal with the White House and a populist wing that doesn’t want to let them do it. Again, you have Republican business groups and donors wringing their hands over the intransigence of the base, while talk-radio hosts and right-wing bloggers warn against an imminent inside-the-Beltway sellout.

A reasonable compromise, for instance, would condition amnesty for illegal immigrants on substantial new enforcement measures, to ensure that this mass legalization would be the last. But the bills under discussion almost always offer some form of legal status before enforcement takes effect, which promises a replay of the Reagan-era amnesty’s failure to ever deliver the limits on future immigration that it promised.

A reasonable immigration compromise would also privilege high-skilled immigration over low-skilled immigration, given the unemployment crisis among low-skilled native workers and the larger social crisis that threatens to slow assimilation and upward mobility alike. But the House leadership seems to favor an approach that would create a permanent noncitizen class of low-wage workers and expand guest-worker programs — a recipe for looser labor markets, continued wage stagnation and fewer jobs for the existing unemployed.

[A] big push for immigration reform would not be as straightforwardly idiotic as shutting down the government without clear goals or plausible demands. But it would probably have some of the same political effects: it would divide the G.O.P., perplex the public, and let the White House reap immediate political benefits no matter how the push turned out.
So why are Republican leaders flirting with the idea? In part for principled reasons — libertarianism, pro-business sentiment and “compassionate conservative” impulses all align to make comprehensive reform seem like an obvious good to many figures in the party, and to obscure its downsides and its risks.

But it’s also hard for G.O.P. elites to let go of the idea that there’s a simple, one-fell-swoop solution to their electoral difficulties. The entire post-2012 immigration reform push was born out of this hope — that a single policy shift could deliver the Hispanic vote, save the party from its demographic crisis, and (perhaps most important) make other reforms and innovations unnecessary.

This conceit was always a fond delusion, not least because most Hispanics are not single-issue voters, and their leftward tilt has always been related to broader socioeconomic concerns. So with them, as with most Americans, the problem for Republicans in 2008 and 2012 was much bigger than the immigration issue: it was a platform designed for the challenges of 1980, and rhetoric that seemed to write off half the country as layabouts and moochers. And any solution for the party, in 2016 and beyond, would have to offer much more than the same old Reagan-era script with an amnesty stapled at the bottom.

Obviously, the GOP effort at rebranding itself isn't working - especially since other big issues are off the table given the insanity of the GOP base.
Posted by Michael-in-Norfolk at Sunday, February 02, 2014