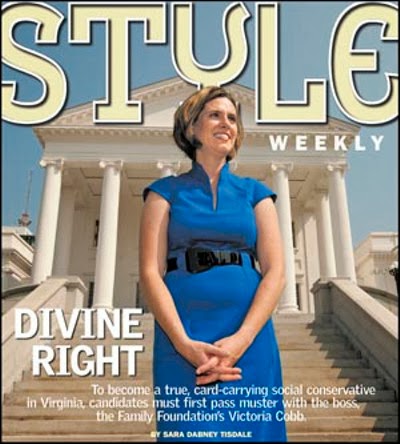 Proving once again that they are little more than the trained circus dogs of the Christofascists at The Family Foundation (TFF enforcer president Victoria Cobb is shown above), the GOP members of the Republican controlled Virginia House of Delegates has passed a bill that would allow any member of the General Assembly - think Del. Bob Marshall who has stated that he's like to drive ever gay Virginian from the state - to defend laws that the Attorney General declines to defend.  It goes without saying that the real goal is to defend the Marshall-Newman Amendment which was the brain child of Bob Marshall and The Family Foundation.  Here are excerpts from a Virginian Pilot piece:

A day before a muscular legal assault on Virginia’s gay marriage ban unfolds in a Norfolk courtroom, Republican lawmakers in Richmond are scrambling to devise a way to defend the embattled law.

On a largely party-line 65-32 vote, the Republican-controlled House of Delegates passed legislation today that would give the House, the state Senate or any individual member of the General Assembly permission to defend a state law in court if the governor and attorney general choose not to do so.

The measure is aimed squarely at preserving Virginia’s 2006 constitutional amendment that declared only a union between a man and a woman can be a valid marriage.

A Norfolk gay couple, Tim Bostic and Tony London, filed a lawsuit in federal court last summer seeking to overturn the Virginia law on the grounds that it violates the U.S. Constitution. Two more plaintiffs, a lesbian couple from Chesterfield County, have since joined the case.

Newly elected Democratic Attorney General Mark Herring announced last month that he would join the effort to overturn the state law, a reversal of the stance taken by his Republican predecessor Ken Cuccinelli. Democratic Gov. Terry McAuliffe has rebuffed Republican demands that he appoint outside counsel to defend the law.


The Virginia plaintiffs and their supporters are hoping their case will ultimately prompt a ruling by the nation’s highest court legalizing gay marriage in all 50 states. It is now allowed in 17 states.

The Republican initiative in the Virginia House is aimed at heading off that possibility.

The measure (HB706) was authored by Del. Todd Gilbert, R-Shenandoah County, and Del. Bob Marshall, R-Prince William County. Marshall was a principal architect of the 2006 state constitutional amendment, which was approved by 57 percent of voters in a statewide referendum.

Democrats argued that Herring had a duty to act as he did once he concluded that the state law violates the federal Constitution, which trumps state constitutions.  Moreover, they argued, the state legislature has no legal standing to interject itself into a federal court proceeding.

“What a novel concept,” said Del. Joe Morrissey, D-Henrico County. “If you ask any law school professor or constitutional scholar, they will tell you with absolute certainty that no General Assembly can give or confer standing in federal court.”

The House-passed measure faces uncertain prospects in the Senate, where there is an even split between Republicans and Democrats and Democratic Lt. Gov. Ralph Northam has the power to break tie votes.

Posted by Michael-in-Norfolk at Monday, February 03, 2014