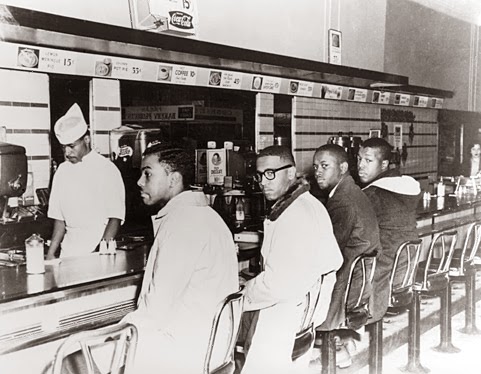 It was 54 years ago yesterday that four black college students took the bold step of sitting down at a whites only lunch counter at the Woolworth’s store in Greensboro, North Carolina, and asking for service.  Not surprisingly, their request was rejected.  They were eventually joined in coming days by additional students, including my friend Ann Vernon, the first recipient of the Equality Virginia "Legends" award.  Ultimately, Woolworth capitulated and the lunch counter was desegregated.  Lest we forget, the Bible was used to justify segregation (as it had previously been used to justify slavery) just as the Bible is now used to justify anti-gay discrimination.  Some things change, but not the use of the Bible by the "godly Christians" to justify hate and bigotry.  Here are highlights from the Smithsonian webpage:

On February 1, 1960, four African American college students sat down at a lunch counter at Woolworth’s in Greensboro, North Carolina, and politely asked for service. Their request was refused. When asked to leave, they remained in their seats. Their passive resistance and peaceful sit-down demand helped ignite a youth-led movement to challenge racial inequality throughout the South.


In Greensboro, hundreds of students, civil rights organizations, churches, and members of the community joined in a six-month-long protest. Their commitment ultimately led to the desegregation of the F. W. Woolworth lunch counter on July 25, 1960.

Note from the photo above how blacks were good enough to prepare food for whites, but not good enough to be served as paying patrons.
Posted by Michael-in-Norfolk at Sunday, February 02, 2014