Is the GOP Trying to Dump the Tea Party? 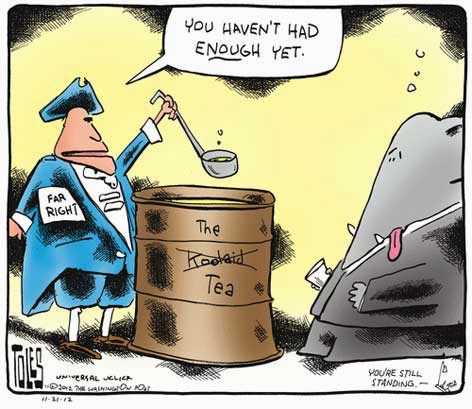 While the so-called Tea Party - a group that is in many ways just a renamed version of the Christofascist element of the GOP that includes an extra large measure of racism - may have helped the GOP to advance the GOP position in the House of Representatives in 2010, the increasing fanaticism and embrace of ignorance by these may be wearing thin with more and more in the GOP.  Or at least to the extent that there is anyone sane left in the GOP.  That's the premise of a column in the Washington Post that thinks a growing realization is occurring in the GOP that long term, the Tea Party is toxic in terms of the GOP's long term survive.  If this is indeed occurring, one has to wonder why it has taken so long.  And if it is happening, it surely has not yet begun to manifest itself in the Virginia GOP.  Here are some column highlights:

The botched rollout of the health-care law has called forth some good news: Republicans are so confident they can ride anti-Obamacare sentiment to electoral victory that they’re growing ever-more impatient with the tea party’s fanaticism.

The GOP is looking like a person emerging from a long binge and asking, “Why did I do that?” The moment of realization came when last fall’s government shutdown cratered the party’s polling numbers. Staring into the abyss can be instructive. For the first time since 2010, the middle of the House Republican caucus — roughly 100 of its 233 members — began worrying less about primaries from right-wing foes and more about losing their majority status altogether.

House Speaker John Boehner (R-Ohio) is telling his rank-and-file that they can win the 2014 elections simply by avoiding the stupid mistakes their more-ferocious colleagues keep urging them to make. In this view, the health insurance issue will take care of everything, provided Republicans end their tea party fling.

In fact, it’s an illusion for the GOP to think that bashing Obamacare is an elixir  . . . . Now that its benefits are fully kicking in, Republicans should be asked persistently, “Who do you want to throw off health insurance?”Also: Do you want to go back to denying people coverage for preexisting conditions? And: What about those 3 million young adults now on their parents’ health plans? “Repeal Obamacare” is not as popular as it seems in GOP bastions.

Nonetheless, some illusions are useful. Boehner is using them aggressively. The immigration principles he announced at his caucus’s retreat last week in Cambridge, Md., are a breakthrough because they are potentially more elastic than they sound.

But reform advocates inside and outside the Obama administration note that even without a “special” path, many immigrants, once legalized, could find ways of gaining citizenship eventually.


Changes in visa allocations, including more generous rules for the spouses and parents of citizens, could help as many as 4 million undocumented residents.

[T]he GOP consists of more than the tea party. Both business interests and conservative evangelical leaders really want a reform law. Most of the intra-party tiffs have been over tactics: whether to use shutdowns or debt-ceiling fights to achieve shared objectives. The immigration battle, by contrast, will expose more fundamental rifts among party constituencies along philosophical lines.

None of this heralds the dawn of a new Moderate Republican Age. Shifts in the Republican primary electorate and the tea party insurgency dragged the party so far to the right that it will take a long time to bring it within hailing distance of the middle of the road. But change has to start somewhere, and the GOP’s slow retreat from the fever swamps may turn out to be one of Obamacare’s utterly unintended effects.


I hope the author is right that some small shred of sanity may be returning to the GOP.  But I will not be holding my breath!

Posted by Michael-in-Norfolk at Monday, February 03, 2014