The Price of Racism and Homophobia: Nearly 50% of Viewers Dump Duck Dynasty 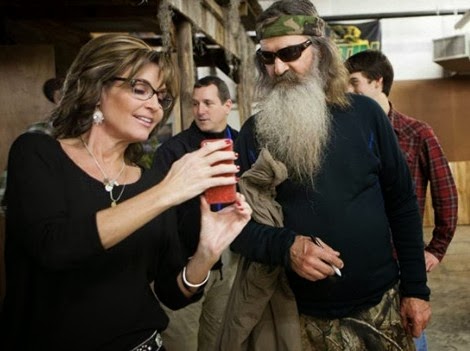 While homophobia may be popular in Russia, it apparently is increasingly associated with a real financial cost in America.  Just ask the folks at Duck Dynasty where viewership has dropped nearly 50% after Phil Robertson's diarrhea of the mouth which included the bashing of gays and a Jim Crow version of race relations.  A&E proved spineless in the face of Christofascists outrage over Robertson's suspension from the show.  But thankfully viewers are demonstrating their disapproval by simply changing channels.  Policticususa has details.  Here are excerpts:


After family patriarch Phil Robertson’s racist and homophobic remarks during a GQ interview, Duck Dynasty’s viewership has dropped by nearly 50%.

Phil Robertson’s racist and homophobic comments to GQ definitely pushed viewers away from the show. Beneath beards and duck calls, millions of Americans found an ugly intolerance for others that they refuse to support.

When Republicans and right wingers like Mike Huckabee, Sarah Palin, and Fox News support a show, that’s a good sign that a program has fallen out of the mainstream, and their ratings are about to take a tumble. There aren’t enough right wingers out there to support the kind of extremism and hate that Phil Robertson was preaching.

More viewers are leaving Duck Dynasty by the week, because the United States is not a conservative country. The Obama years have demonstrated that the nation is moving left, not right. Duck Dynasty is slowly fading away.
[T]here aren’t enough right wing Republicans in this country to take the place of the millions who stopped watching the show after Robertson’s remarks.

Nearly 6 million television consumers have decided that they don’t want to spend their evenings with the Robertsons. Hate and intolerance have not been rewarded. Almost half of Duck Dynasty’s audience is gone, and more are deciding not to tune in each week.