Why Persecuting Gays Is All the Rage in the Third World 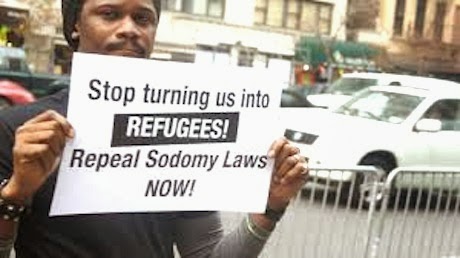 The exporting of hate and homophobia by American Christofascists has certainly played a roll in the growing homophobia and persecution of gays in Africa and other parts of the so-called Third World (and even in Russia).  Aiding this effort has been the general ignorance and uneducated nature of much of the populace in these targeted countries.  Yet a third cause is fundamentalist Islam.  But a piece in The Daily Telegraph also makes the case that these hot beds of anti-gay bigotry are using gays to distract their populace and give the appearance of fighting past colonialism even as American Christofascists dupe the population into acting as the Christofascists' trained circus dogs much as they do with black pastors in America (and certainly in Virginia) who are too uninformed to realize that they are being manipulated by the same folks that supported segregation and the Jim Crow laws.  Here are some excerpts from the piece in the Telegraph:

Is homophobia the new anti-colonialism? It’s an odd question to ask, but an important one. In dozens of countries, the persecution of homosexuals has acquired a new ferocity. Anti-gay sentiment is turning into a cause that unites non-Western societies divided by religion, ethnicity and history.

This is bad news, obviously, for gay people who find themselves dragged in front of magistrates, bullied out of their jobs, spat at in the street or executed. It’s also jolly embarrassing for Western governments, who don’t want to say anything that might jeopardize trade relations – and also for liberals, who hate to point the finger at the developing world.

The one example of persecution that’s attracted a lot of attention is Russia’s new ban on “gay propaganda”. No one in the West likes Putin’s regime, which you can criticise without risking charges of racism.
But when it comes to the Middle East, Africa and south Asia, any Westerner who sticks up for gay rights is inviting accusations of racism, neo-colonialism and Islamophobia.

I’ve been looking at the map, and I reckon you could walk from Angola to Burma without setting foot on land where homosexual activity is legal – except for a sliver of Iraq, which had decriminalisation imposed on it in 2003 but which is one of the most dangerous places on earth for gays.

The taboo against same-sex activity is getting stronger, not weaker. The spread of Islamism is a factor . . .  However, Christians and Hindus are implicated, too.

In Nigeria, Anglican clergy helped pass into law the Same-Sex Marriage Prohibition Act, which bans even displays of affection between homosexuals. In Uganda, parliament has passed a bill that calls on citizens to report homosexuals to the authorities. India has just recriminalised gay sex.

Why this resurgence of homophobia? Most anti-gay countries, with the exception of India, are economically stagnant – and resentful of the prosperous, decadent West. (Note that China, preoccupied by money, can’t be bothered to climb aboard the anti-gay bandwagon.)

Until recently, anti-colonialism united these countries; but, with so few colonies left, that cause has been struggling. Then along came same-sex marriage, which Western LGBT activists want to see legalised everywhere.

Suddenly conservative societies have a new bogeyman, a neo-imperialist assault on their ancient way of life. And how interesting that Russia should choose this moment to target its own sexual minorities. Just as the Soviet Union once led the anti-colonial movement, so now Putin is portraying himself as the champion of “traditional values”.

The LGBT lobby found it ludicrously easy to change the law in Britain – thanks, unexpectedly, to the Tories. Now let’s see it rise to the much less fashionable challenge of wiping out vicious legislation in the developing world.

The author of the article is correct.  LGBT activist MUST do more to counter the horrors being committed overseas.  One way to do that is to work to break the power of American Christofascists and to push to have hate merchants like Scott Lively criminally prosecuted.  As long as these people keep receiving donations and receiving tax exempt status, they will continue to export hate and support anti-gay regimes.  Another thing to do is to stop tourism to any gay countries like Jamaica and Russia.  Why help support those who hate us?