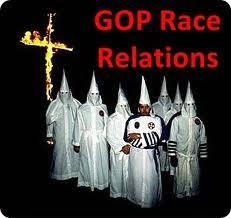 I do truly wonder at times when it will become fashionable for members of local city and county committees to attend monthly committee meetings dressed in KKK regalia.  Increasingly, the GOP base acts as if they were already card carrying members of the Klan.  Just look at the reaction that has been triggered by the GOP House leadership floating some still rather nebulous principles for immigration reform.  In some circles the spittle flecked hysteria is so bad one would think that Pope Francis had raped an altar boy on the main altar of St. Peter's Basilica.  If one wants two see how Hitler rose to power, look no farther than today's GOP base and its inability to see humanity in others.  The New York Times looks at the blow back John Boehner and others are receiving from the knuckle dragging racists in the party base (most of whom probably go to church on Sundays and congratulate themselves on their piety) .  Here are excerpts:

As House Republicans embarked late last month in luxury buses for their retreat on the Eastern Shore of Maryland, their ears were already ringing with angry phone calls. Heritage Action, the political arm of the conservative Heritage Foundation, was imploring its members to flood the Capitol with warnings to accept “no amnesty.”


The day before, the Tea Party Patriots group set in motion 900,000 automatic phone calls in 90 Republican House districts, connecting tens of thousands of voters to their members of Congress. The hashtag #NoAmnesty blazed across Twitter. About the same time, FreedomWorks, another anti-tax, limited-government group, was pulling in signatures on its “fire the speaker” petition against the House speaker, John A. Boehner.

When House Republicans gathered on Jan. 30 to actually read and discuss Mr. Boehner’s principles on immigration reform, his was already a losing battle.

A week later, Mr. Boehner shelved the issue, declaring Thursday that he could not move forward with a comprehensive overhaul of the nation’s immigration laws until President Obama won the trust of the Republican conference.

“I would’ve been surprised if Boehner didn’t do that,” said Representative John Fleming, Republican of Louisiana and a leader in the opposition to immigration legislation. “Few things in politics are as obvious as this one. That’s why there was a collective shrug in conservative leadership” when the speaker all but declared the measure dead.

Since October’s government shutdown, Mr. Boehner has been in open warfare with outside conservative groups, dealing them one loss after another . . . .  But on immigration, the groups flexed their collective muscles.

In the end, Mr. Fleming, the representative from Louisiana, said that the speaker understood it was not worth picking a fight that would almost certainly end with nothing accomplished.